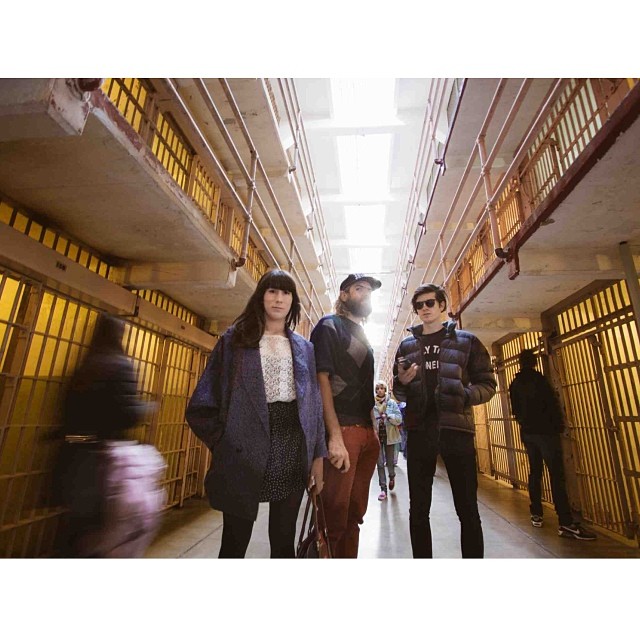 Tonight saw Cloud Control take to the stage in Heaven, London. The Aussie quartet, winners of Australian Music Prize 2011 for debut album Bliss Release, have recently been on a tour offensive of both the United States and Europe and show no signs of letting up soon. With a new album released last summer, Dream Cave, Cloud Control’s relocation to the UK also saw a change in direction to their music with help from producer Barney Barnicott (Arctic Monkeys, Franz Ferdinand). However before they were able to hit the stage the support act provided a taste of what was to come.

Opening the evening was former NME Radar band of the week Younghusband. With a punchy set and songs which wouldn’t sound out of place as album fillers on early Verve albums, Younghusband displayed that the Brit pop sound which has served the British indie-guitar genre so well has not lost its weight 20 years on. A stand out track for me came in the form of the Water Boys-esque Silver Sisters, eerie vocal harmonies complemented distorted guitar to create a sound which had the slowly filling venue head bopping and moving away from the bar to have a listen. With debut album Dromes released last summer, and a jam-packed tour scheduled for the continent (supporting Cloud Control) as well as the UK this year, Younghusband’ days as first support act may soon be over.

Next on the bill came the electronic driven sound of Teleman. This saw a noticeable mood change in the crowd where an obvious fan base made themselves heard and got the well over half-full venue finally moving! Sounding from a genre which some say is saturated by the likes of Two Door Cinema Club and Foster the People – Teleman provided expert harmonies over simple guitar riffs and layered synth. Though with a slightly slower pace than the previous stated bands, songs like Cristina and In Your Fur got a real reaction from the crowd and at one point you could be forgiven for thinking they were the headlining band! Perhaps due to this reaction from fans, Teleman seemed truly relaxed and confident in what they were doing compared to Younghusband, and provided a 30 minute set which I could have happily left after.

Though I’m glad I didn’t.

Once Cloud Control got on stage the full venue really made itself heard, standing at the front you got a real sense of just how much this band is loved despite only 2 album releases and relatively little air time in the country. An explosive light show mixed with a much fuller sound than either of the previous bands had been able to muster marked that this was the headliner, and one to watch.

With a flying start the band plunged straight into Dojo Rising, a firm favorite amongst fans of their new album, Dream Cave. This seemed to be the turning point of the night which saw the entire venue swaying and singing the chorus line ‘Give it to me easy, give it to me hard’. The band carried on the summery-festival sound with songs such as This is what I said and Moonrabbit which kept their captured audience active and involved throughout.

However Cloud Control also showed just how much of an influence living in the UK had upon their writing and musical direction. Scar, the song perhaps played most often from their album within the mainstream media (and my own itunes) screams british indie-pop influences ranging from James to Ocean Colour Scene. The song Island Living also showed a more mature sound, leaving catchy riffs and synth at the door and proving the band has much more to give.

In terms of performance you’d be forgiven for thinking Cloud Control are a veteran arena band. Energetic, full on and downright fun – they give the impression that they are just happy to be performing and doing what they love. Lead singer Alister Wright has one of those voices which excels when live – the slight teenage angst that each song holds is delivered with real emotion and power. This is in perfect contrast to songs such as Happy Birthday and The smoke, the feeling where keyboardist Heidi Lenffer takes the lead – here a more mature edge is given and provides some relief from the emotion-laden Wright. When together their contrasting voices provide beautiful harmonies which only adds to their already quite personal sound.

With festival season still just that bit too long away to look forward to, Cloud Control are one of those bands that provide a little ‘hit’ to keep you going. With summery vibes and sing-along lyrics, you can’t help but feel like you’re on a field somewhere kneedeep in mud and festival goers. And what could be better than that?

Cloud Control are currently touring Europe and than from March, touring their native Australia