Six mighty slabs of repetitive riffing make up Finnish band’s latest album and their latest press photo suggests they are having a great time. 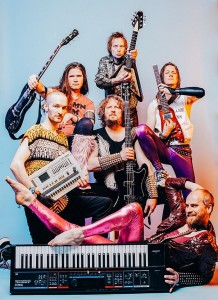 With twenty-six years under their belt, this latest release is the first I’ve heard and very pleasing it is, too. Cruising effortlessly between the borders of hard rock, Kraut rock, space rock and psychedelia, it has a huge momentum. Don’t be surprised to hear Seventies riff clichés, noodling guitar excursions, grooving Germanic circular riffs, things Hawkwind might play and jazzy drum solos. It is big territory and the six tracks have to be substantial to cover all that ground. They feature choral work, solos, harmony vocals and all manner of rock stylings that add a level of pomp and glam to proceedings. Add to that lyrics shouted, declaimed or sort-of sung in Finnish and you have something impenetrable to the rational mind but appealing to the gut. Think perhaps of Damo Suzuki, making consciously meaningless vocal efforts as he holds varying types of band on track. Finnish isn’t Damo-nonsense but it may as well be to me and the band have been known to sing in a made up language themselves.

With over thirty studio albums (and half that number of live releases), should you choose this one? This reviewer hasn’t got a clue. I found it very accessible and gripping; the circular riffs, crazy ideas and general sense of barking cracked-ness gave me a lot of fun within what is usual a serious genre. I gather this is faster and harder than previous releases, more a Stadium-Glam-Doom confection of grandiose daftness.

A Finnish friend of mine tells me the band’s own description of the release in Finnish translates as: “It’s good solid Circle. The riffs are churning and there’s a bloke screaming on top.”