In an alternate universe Chuck Prophet is playing the arenas. His anthemic songs, bravado and showmanship propelled him there. In our universe he plays The Brudenell Social Club every couple of years and builds Springsteen-length sets into acts of mesmerism. Chuck shapes the two hour show so that it builds to anthemic choruses and guitar solos toward the end before gentling down a little and sending us off into the night – it’s a very professional piece of work. 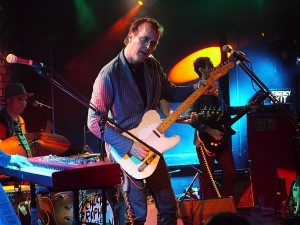 At the same time, Prophet plays with the concept of rock and roll. He invites us to criss-cross the divide between rock image and rock reality, playing small (but cool) venues with tunes that capture the big picture. Breaking the music with regular chats and tales, always with a wink that says “this is how rock and roll works, you and I know it’s a game – play along and we’ll have a great time”. And we do. Chuck makes us believe in this terrific rock and roll show and we feel honoured to get to witness it. 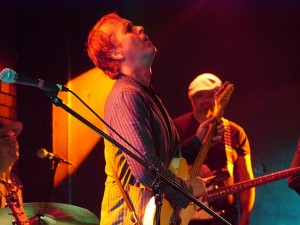 The new album is themed on Bobby Fuller and the set is interspersed with links to Bobby Fuller – opener, a song half-way and the closer, a song by the Bobby Fuller Four. Shot down at age 23, Fuller never reached his potential. Standout showpieces are You Did (Who Put The Bomp), a song about Willie Mays, the San Francisco baseball player and Holding On – his personal Forever Young. In-between, established favourites like Ramona and Iodine please and newer songs follow recognisable paths. Prophet sings songs about the Ford Econoline, stalwart of the band touring on a budget, baseball, crappy venues and a dozen other things that catch his eye – he seems to spend his life looking about for things that illustrate his worldview. He talks about coming here first as a solo act in 1993 and the venues he’s played, praising the Brudenell. He has a running joke about stealing Siouxsie and The Banshee’s equipment and swaps banter with the adoring front row. 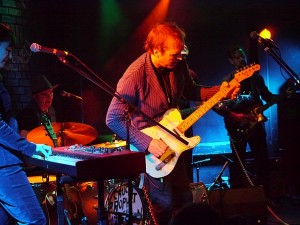 Chuck seems to be really enjoying performing and gets more and more into it as he lets rip on the guitar. He clowns around, mugs and grimaces, involving all the band as he draws first one then another into play offs. Between his own personal characterful solos and his sideman with bottleneck slide, we are well-served for guitar and they build in substance and momentum as the set reaches its peak. Awash with tunes, rock, swagger and shared history, Chuck Prophet tries to ease the audience back into the real world as the set winds down and they leave, ready to proselytise again.

Please catch Chuck Prophet and The Mission Express when they come near your town.