Chuck Prophet is a man with a ridiculous amount of confidence and that confidence is well-founded. It pours out of him as he delivers his songs as if they are just about the best thing ever – and that means they are. And he performs like rock and roll is the most important thing in the world – and it is, tonight. He struts like a man playing to a crowd of thousands. 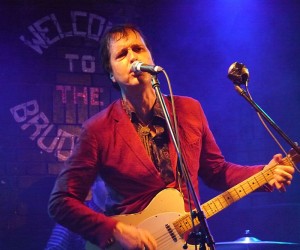 But, all the time, he’s giving the lie to his creation; his stories, asides and sideways glances tells us that we are complicit in this lifting-by-the-shoelaces operation of the making of a rock gig. This man, who acts like he could be playing to thousands, stops to lay hands on an ardent fan or gently chide an over-enthusiastic show-off at the front. In other words; he makes it personal. Right up to the traditional closer, “You Did”, where he tells us WE put the bomp in the bompetty bomp. In a two hour show, nothing sagged and momentum grew towards the end, till nearly everyone believed this is a world-beating group. And they are, because they believe they are. 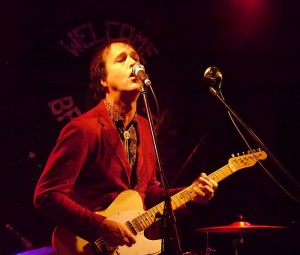 I’ve heard Chuck Prophet and The Mission Express a couple of times before and each time I am aware that, like too many bands, he is a legend to a few; critically acclaimed, trumpeted by DJs who know, but ploughing a furrow that’ll stay near the rock frontline. Prophet is a showman, with a line of patter and a structure to the show. His laconic knack of speak-singing slightly off the beat has a knowing lilt to it and his guitar playing has a chunky distinctiveness. He has a bottle-neck lead guitarist to support and the two alternate, one more fluid, while Chuck has a certain rawness that charms. The gawky enthusiasm and grin go a long way. 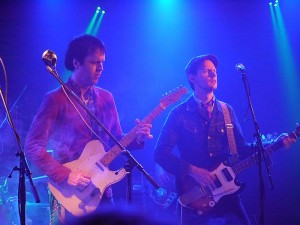 He’s been in the biz a good thirty years now and remembers Red Rhino Records (from York in the 80s) owing him money. Despite that he keeps popping out records. By my count he’s on something like his seventeenth, yet when he asks for requests from the crowd he has to throw them back: “you know we’ve made some records since 1991…….” he quips. His set manages to cover his whole career and add a bit of Creedence’s Lodi too. The notable thing is that when, after briefly playing Lodi, he segued into his own Wish Me Luck, no-one missed Lodi, they were grabbed by the new tune. The heart present in the songs and the delivery is a relatively rare thing in a touring band and is a winning thing. 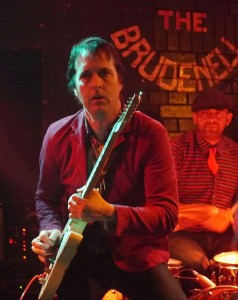 I suspect his strikingly worn Fender could play many of the songs on its own and the condition of the instrument tells us just how much it has been caressed and adored as the deliverer of memorable tunes and nights out. Don’t miss this band when they come to your town.