Sometimes it’s great to take a chance. On the back of two slightly twee acoustic numbers found on YouTube in a park somewhere at SXSW, a friend and I headed out to Leeds on a Saturday night. We were in search of great pop and we found it. Okay, so we didn’t know any of the songs but that’s what a gig is for, isn’t it? Not to hear the album played note for note, but to hear something different and be moved by it. Sometimes you catch a crappy band but tonight we got lucky. You’ll be hearing more of these but you weren’t there, were you? Never mind – you can catch up next time round. 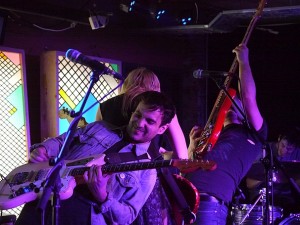 Charly Bliss turned on the charm, the energy and the stage-craft and sold the songs over half an hour or so. It was great pop-punk. Eva Hendricks wears her heart on her sleeve lyrically and pours her heart out in songs about her therapist (Ruby) and the turmoil of relationships. Meanwhile, the band is a full partner. They’ve thought the set through and every song has a set-piece where some combination of the backline throw some poses – nice to know they care. Eva is excited we have even heard of the band and have come out to hear them. She flatters us – she’s from New York and she’s heard about how bad our food is but it isn’t and she likes it here better than back home. Nice of her to say but I don’t imagine the view from the back of a van doing the motorways of the UK is that good! 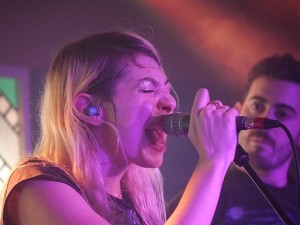 The bass loves to strut and pose, the guitar has some classy simple solos and the drums keep it going. Songs have big hooks, guitar figures are simple and stick in the ear, lyrics are personal and yet poppy. The package is great pop in a rock idiom. 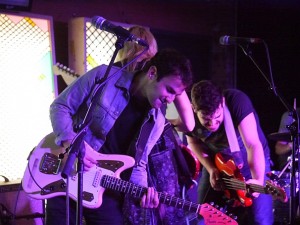 Eyes are, of course, on the ever-emoting face of Eva and her flitting between guitarist and bassist. She and the bass are very mobile and there’s a lot of bouncing and posing amongst the heart-on-a-sleeve lyrics. It’s a hard-working band and that makes us love them. They aim to please and they please us a lot.

What could be better than punky pop on a Saturday night in Yorkshire? 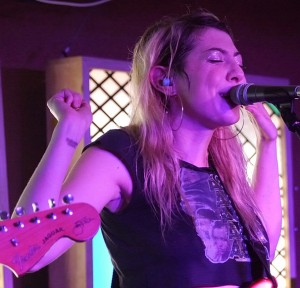 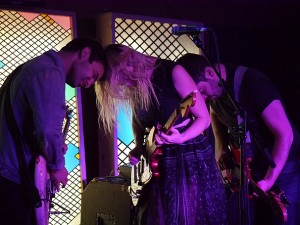