Supporting Single Mothers – and much more interesting – this duo pretty much played the excellent album and likely won some new followers. The album eschews artifice and the live sound isn’t that different. Cassels say what they mean and they play it mean, keeping it raw and real.

Jim plays the guitar, squalling it up good and his brother hammers the drums. Interspersing the set with asides, like the ‘totally hench’ sheep they saw in the Dales. ‘Stat’, it was. Probably a Texel, says this Yorkshireman. Cassels are angry and they are observational. They want to tell you about their world and how they see things around them. A good start is the gig opener (and album opener too) – ‘Coup’, where he hymns an army of waifs and strays. Working from gently picked strings to stormy sounds and invective, it engages the small crowd. I’m disappointed to hear that Chipping Norton didn’t actually invent baseball but heartened to hear them slag off the Range Rover-driving folks that live there. Divorce gets a kicking, whilst dementia is lamented and lambasted at the same time. The lyrics carry a pathos that belies the invective on show elsewhere. The state of the world is attacked in ‘Utopia’ and ‘Let’, where bigots peddling racist lies are slagged off. Much hatred is reserved for their step-dad and the self-deprecating between-song banter is at odds with the subject matter. 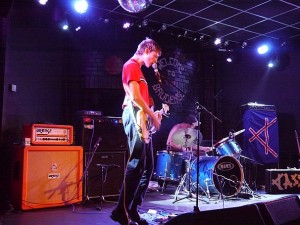 Jim admits, after all the lyrical bluster, that he’s not as punk as he might be. Earlier, cleaning blood off his guitar, he realised that just wasn’t the rock thing to do. That said; the last song ends in guitar mangling and a few sheets of sound.

Quietly spoken, waifishly skinny, the anger and attack are a contradiction – one that makes this band worth catching.

Check our album review at: http://www.vanguard-online.co.uk/cassels-epithet-as-angry-and-as-yet-focused-an-album-as-ive-ever-heard