If you imagined what this gig was like, you’re right. Exactly what I expected on seeing the new hot ticket.

They know Leeds from playing The Brudenell and asked Nathan, the owner, to broker them a venue off the beaten track. And when the Brudenell isn’t cool enough for you, you have hit an alternate reality. So a pocket universe opened up on Regent Street in a baking hot sweaty space, more like an old warehouse than a venue. The queues for the one unisex set of loos would have been worse if liquids weren’t being sweated out. It fitted the defiantly un-serious band. With lyrics ranging from wanking in a quiche to attacks on assorted capitalist ills and praise for the NHS, the crowd they’ve drawn are well up for a bit of jumping about and drinking more than a bit of beer. I see traces of The Libertines and The Artics in the crowd but they’re much nicer and up for having a good but non-threatening time. 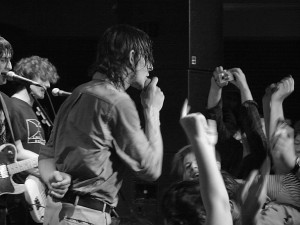 I can’t actually hear any of these fabled lyrics but I enjoy the noise, the chaos and the shoving about. The band make a virtue out of mucking about and are clearly up for letting things go astray as the two front-men take leaps and flail around the stage. Synth parts, semi-reasonably played on record, become random twists and jabs, lyrics are shouted or mumbled. No-one in the audience is at all bothered and it becomes a celebration of sweaty humanity. Tracks like ‘Tell Me Lies About Manchester’ are little more than chants but the crowd know the words and shout them, whilst neophytes scratch their heads. 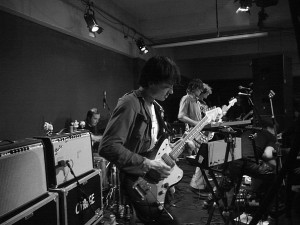 Last time I saw a crowd like this was The Other Ones but Cabbage lack the charisma of Dominic, and instead of being rabble-roused we are merely pummelled senselessly. The range is wide and covers a number of musical bases, held together by guitar and bass hiding behind speakers at the sides of the stage to keep things vaguely together. Things move gently towards country bounce towards the end, with Kevin preceding ‘Free Charles Bronson’ (replacing ‘Uber Capitalist Death Trade’s’ ‘Free Steven Avery’). Cans spray, drink is thrown, people fall onto the stage, invaders are hustled off, singers are hugged, shirts taken off and singers leap into the crowd. What you’d expect. 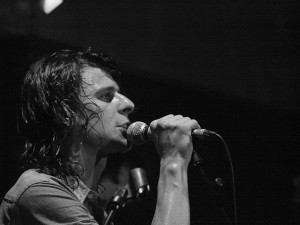 They’ve never taken themselves seriously (look at the terrible name) and are clearly still having a laugh. They’re not the messiahs of music, they’re just naughty boys. No harm in that. 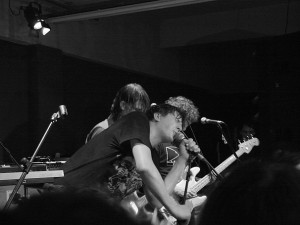 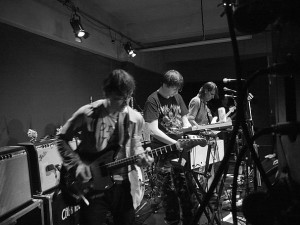 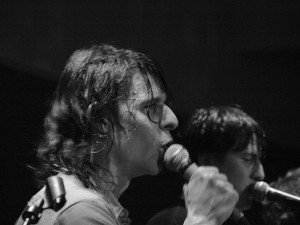