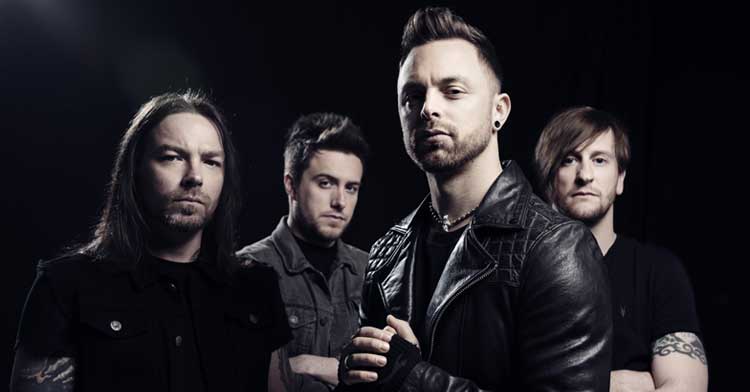 Bullet For My Valentine are proud to announce their eagerly awaited fifth studio album VENOM, released 14th August on RCA Records.
The first taste from the blistering new album “No Way Out” premiered on BBC Radio 1 and is available for instant download with every pre-order of VENOM from www.bulletformyvalentine.com.

Produced by Carl Bown and Colin Richardson (Slipknot, Machine Head, Trivium) at Metropolis Studio in London, VENOM is an unrelenting, fierce step forward for Bullet For My Valentine. Their heaviest record to date, it sinks its teeth into listeners with a powerful delivery by vocalist/guitarist Matt Tuck, ferocious riffs by guitarist Michael “Padge” Paget and rapid-fire rhythm courtesy of drummer Michael “Moose” Thomas. On VENOM the trio maintains their signature balance of heavy, coupled with surging melody, and pushes themselves to the next level.

“It’s pretty hard to sum up an entire record after spending so much time writing and recording it and all the blood, sweat and tears that have come with this one especially,” says Tuck.

“It wasn’t easy revisiting some very dark places to come up with lyrical content for this one, but once I knew where it was heading and I was comfortable with letting certain things out – all hell broke loose. It’s easily the most aggressive record we’ve ever done and lyrically it will no doubt touch a nerve with a lot of people that listen to it. I cannot express enough how proud I am of it, and can’t wait for everyone out there to hear it too. We’ve reinvented who we are and are ready to take on the world once more.”

Bullet For My Valentine’s progression of sound is evident on VENOM, presenting a harder delivery and a more complex song structure, as witnessed on the band’s crushing new track, “No Way Out.”

“To write this track I had to put myself into a very dark place, a place I hadn’t been to for a while mentally because of how my life is now, compared to what it was before the band exploded,” Tuck adds. “It is one of, if not the heaviest tracks we’ve ever recorded musically and lyrically. I’ve lived with it for a while now but still every time I hear it, it gives me chills. Hold on tight it’s a hell of a ride.”

The band also announces the additional of fellow Welshman Jamie Mathias as their new bass player and backing vocalist. Hear the first performance of the new line up, as the  freshly announced ‘secret headliners’ of the Camden Rocks Festival, at the Electric Ballroom, Saturday 30th May.‎

Bullet For My Valentine have established themselves as one of the biggest bands on the planet. Over the course of their astonishing career they have sold 10 million albums and toured the globe countless times, gaining more fans at every turn. In the UK their last tour saw them hit sell out arenas, including the 10,000 capacity Wembley Arena.

Following this, the band spend this summer on a headline tour of South America, as well as playing alongside Slipknot and Lamb of God, on what will be one of the biggest tours of the year. Bullet For My Valentine are one of the biggest metal bands on the planet, mixing classic riff-heavy rock with a contemporary grasp of dynamics

VENOM is available to order now from www.bulletformyvalentine.com in some incredible deluxe packages, featuring: white vinyl, cassette, deluxe CD, signed and limited edition merchandise. Plus, every purchase comes with an instant download of the new track “No Way Out”.

Bullet For My Valentine also today announce a huge UK headline tour for the Autumn in support of VENOM. In the UK they will be playing venues off the beaten track, to fans in every corner of the country.

Tickets go on sale Friday May 22nd at 9am. Fans pre-ordering the album from Ticketmaster before 12pm on 20th May receive a pin code that allows access to pre-sale tickets on Thursday May 21st, only from HERE

All autumn dates are as follows: 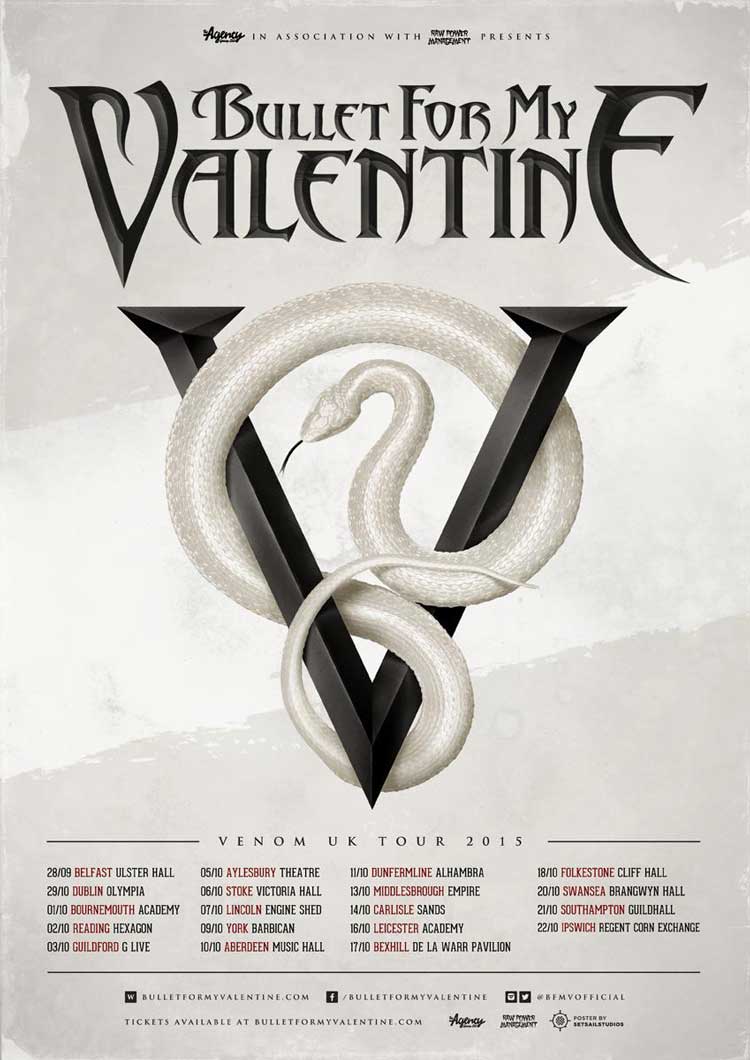