Bring Me The Horizon and Don Broco pull off the show of the year at Manchester Arena! 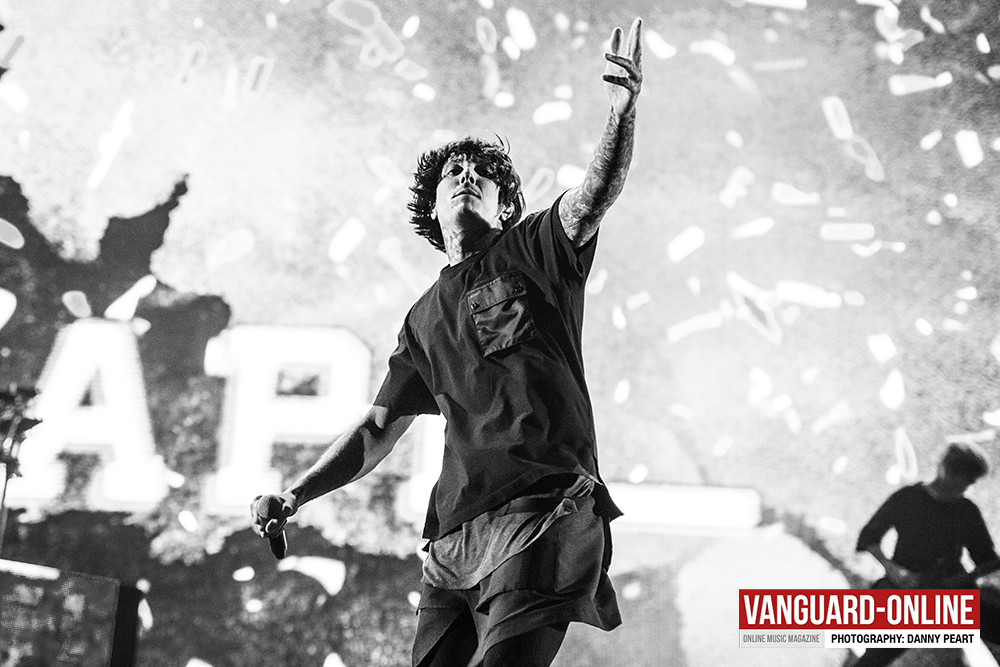 Tonight may not be sold out, but there is excitement in the air as rock fans young and old flood the arena doors in Manchester for a highly anticipated show from Bring Me The Horizon, arguably labeled by some, as the tour of the year. 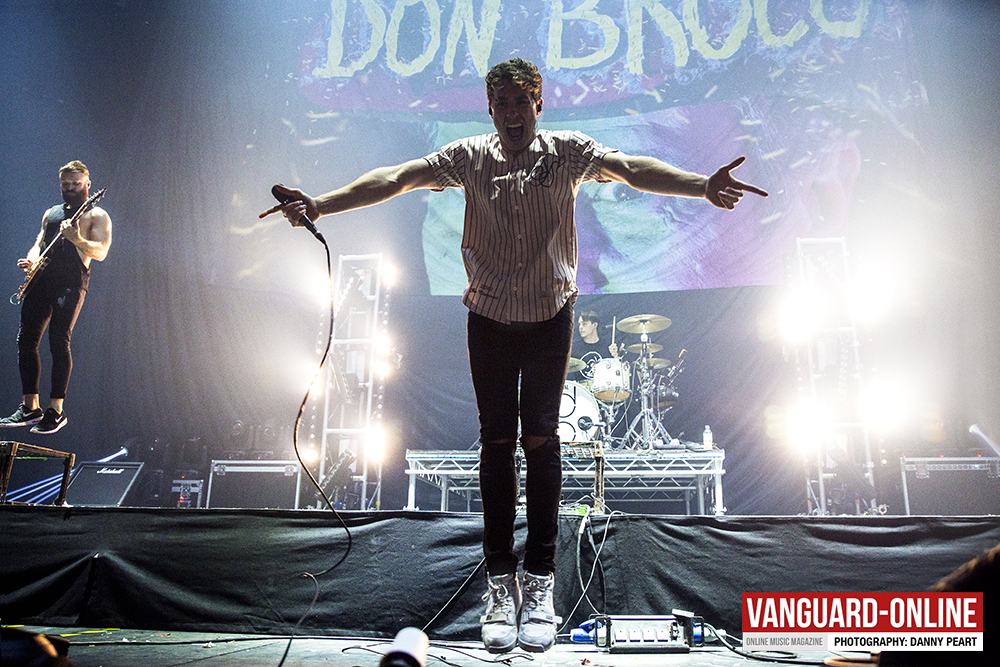 Before Bring Me The Horizon prove their worth as arena headliners, it falls to the Bedford boys; Don Broco (8.5) to shake up the crowd and wake everybody up ready for a furious rock show. Having seen Don Broco a few times this year on their club tour back in July/August, we were more than intrigued to see how they would transition the show over from the small club shows to the arena stage. We certainly wasn’t disappointed.

Thrown straight into the frantic new track ‘Everybody’, the band is bouncing around the stage making sure every inch is covered. It sounds as good live if not better than the studio version, and absolutely huge as it blasts through the arena speakers.

‘You Wanna Know’ confidently follows with it’s lively chorus, and ‘What You Do To Me’ has guitarist Si Delaney on his toes as he glides back and forth from his electric to his acoustic guitar from verse to chorus. 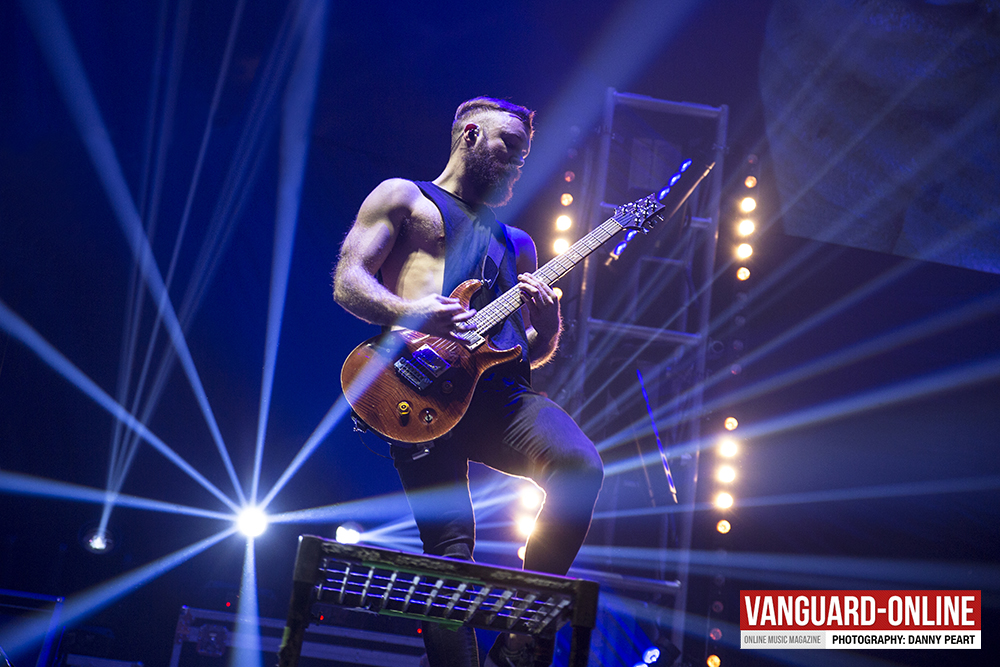 One thing that is noticeably different however is the front man Rob Damiani’s vocals. Due to a throat infection the frontman battles his way through the set backed vocally by drummer Tom Donnelly and Adam Marc. It is noticeable, however his enthusiasm and drive to give it the best he can, more than makes up for this, and lets face it, a gritty vocal performance only adds to the heavier material!

Speaking of which, you would expect the set to be built up from Broco’s heavier material under the circumstances of playing to some hardcore BMTH fans this evening, but they do throw in the likes of ‘Nerve’ which slows things down. Nonetheless it goes down rather well with the crowd and a change in pace is always welcome when you’re putting the crowd through a pretty hefty workout!

Predictably it is the powerful rock tracks such as ‘Priorities’, ‘Fire’ and ‘Money Power Fame’ that get the best response, and they are more than suited to be played on a stage of this size.

A convincing performance from Don Broco and one that will likely turn a few more heads in their direction, particularly when the new material drops if ‘Everybody’ is anything to go by! 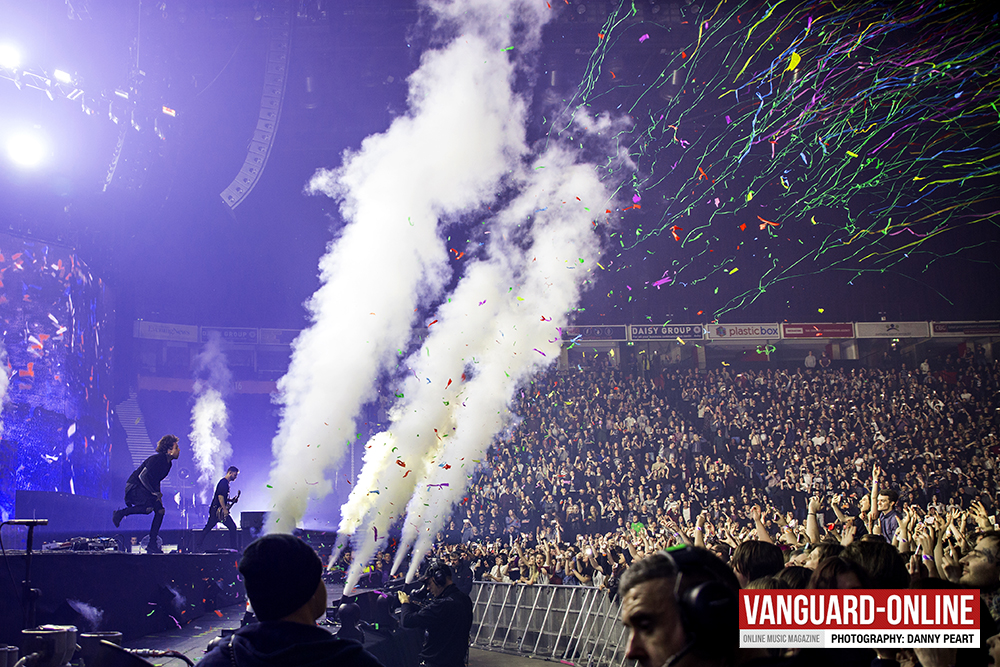 As we’re sure you know by now, Bring Me The Horizon (10) are a noisy bunch, and you can expect nothing less than Steel City’s finest to come out with a bang! An explosion of CO2 cannons and streamers blast from the forefront of the stage to flood the crowd with colour, as the fantastic ‘Happy Song’ kicks in and has us all singing ‘a little flipping louder’ to get the night off to a flier!

We did wonder if Bring Me The Horizon playing Wembley Arena back in 2014 was a one off, and to be completely honest, the band probably did too, making sure they caught it all on a live DVD and creating such a special night for everyone involved. But after the release of ‘That’s The Spirit’ they absolutely destroyed Reading & Leeds last year leaving everyone speechless in what could have easily been a festival headlining performance.

Judging on tonight, Bring Me The Horizon were just experiancing a taste of things to come back then, and with a set of outstanding tracks from multiple albums who knows where they could end up next. However tonight we mosh, sing and scream along to a set built heavily from our favorites from ‘Sempiternal’ and their most recent hit album ‘That’s The Spirit’.

From 2013’s ‘Sempiternal’, ‘Sleepwalking’ and ‘Shadow Moses’ still hold their worth with a belting show from the lads, and ‘Can You Feel My Heart’ always seems to be one of the best parts of the set, and tonight is not too much different.

Even though the set features much from ‘Sepiternal’, it is of course ‘That’s The Spirit’ that tonight is all about. Already having kicked off with ‘Happy Song’, ‘Avalanche’ and ‘Follow You’ have everyone singing along to the top of their voices. ‘Doomed’ could be one of the stand out performances of the night as it sends shivers down our spines, as Oli Sykes screams out over the exploding chorus backed by a seamless performance from the band. 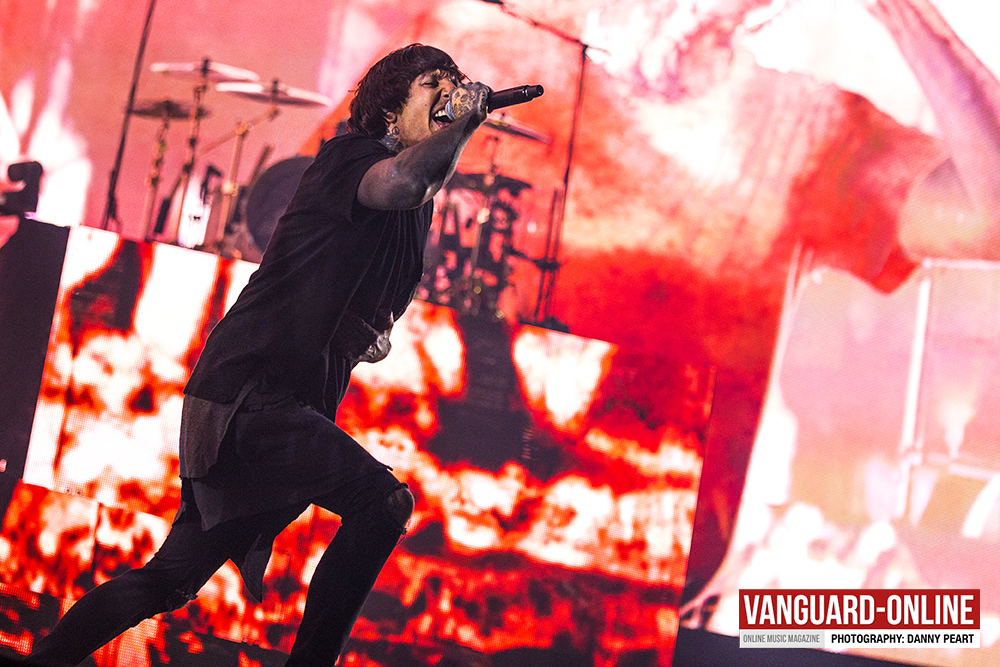 ‘Chelsea Smile’ was the only track from the early days featured in the set, and it still goes down an absolute treat. It causes mayhem in the pits and the whole room is bouncing from front to back, as the frontman demands everyone to get low before the final manic and noisy chorus.

It would only be fair to say a large part of the ‘wow’ factor tonight comes from the production as it does the band, as the lighting, pyro and and visuals where exceptional. The giant stage is backed from side to side with towering displays showing some incredible visuals interlinking with the lyrics and music videos from song to song, as well as multiple platforms built in for Oli to roam around aside Drummer Mathew Nicholls, and Jordan Fish on supporting vocal duties and keyboards.

The only criticism we have is that frontman seemed to rely quite a lot on Jordan Fish for the singing parts throughout the night, and it did seem like there was a backing track behind Oli’s vocals at times. Though screaming your way through an hour or so set every night is going to take its toll on the vocal chords, so it can be excused! Also the floor was only half full tonight so it did feel seemingly empty at times in the crowd, but hell, it’s a BMTH show, the more room on the floor the bigger the pits right?! 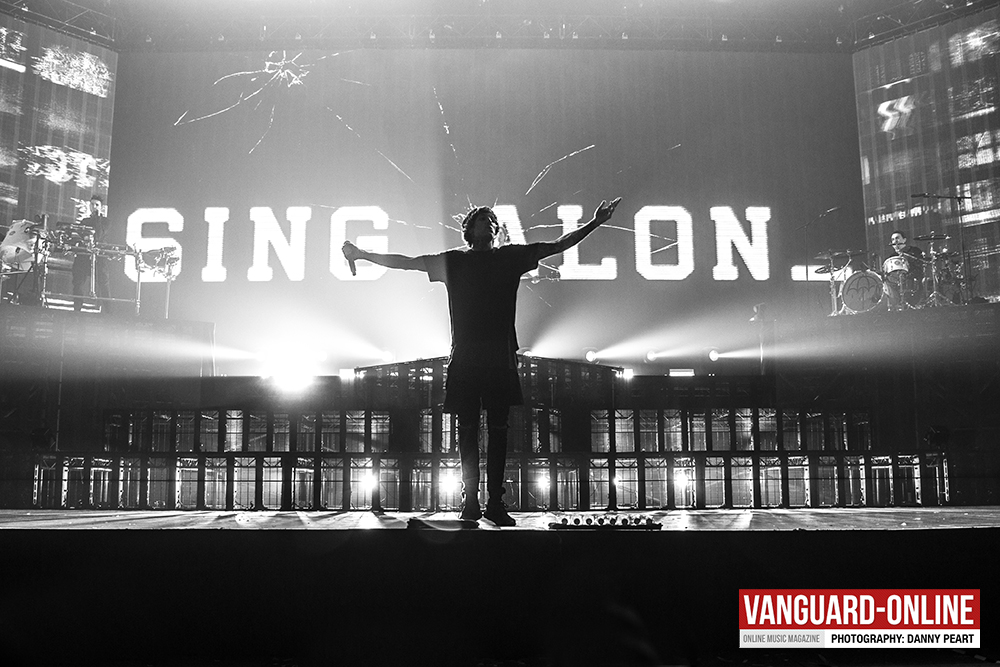 An incredibly thrilling set comes to a close with the bouncing ‘Throne’ which is has everyone moving and singing along once again. It leaves us with a taste for more, and luckily the band return with a pretty hefty encore…

‘True Friends’ Is arguably one of our favourites from the new album, and it sounds absolutely huge coming from the arena stage. The new single ‘Oh No’ has the night slowed right down temporarily, which feels unusual for a BMTH show in full throttle. But Oli’s vocals to the chilling song provides some diversity to the set, and it creates the opportunity to light up the arena with lighters and mobile phones for quite a special moment.

There was always only one way to end the show, and it was going to be with ‘Drown’. We’ve seen it before, and we will likely see it again, but it always ends up being the most memorable part of the night, as the final chorus kicks in to an explosion of CO2 cannons blasting from the stage and falling confetti literally drowning the crowd. It leaves smiles on everyone’s faces, including one beaming from the frontman himself who knows he and his band mates have done themselves proud once again 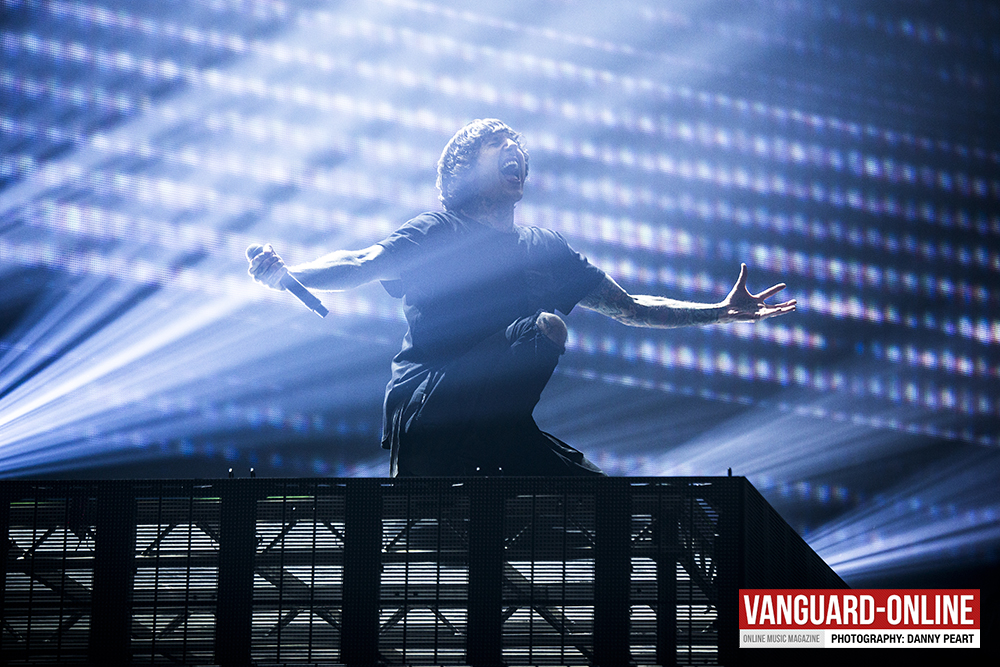