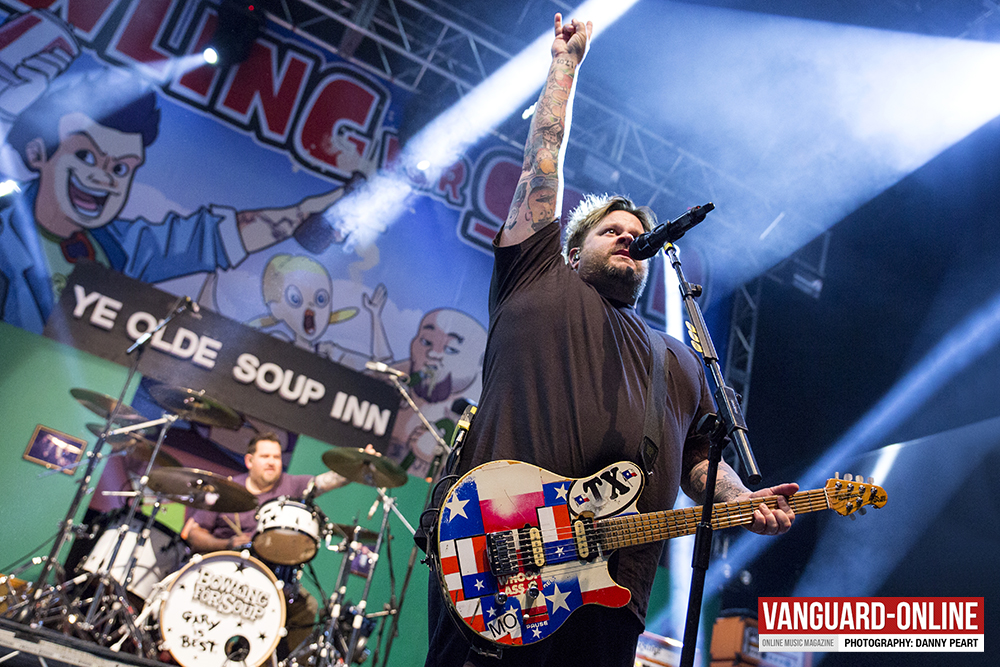 After bidding farewell to the UK in October 2013, Bowling For Soup are back at the Leeds O2 Academy, and a full house is waiting here to great them back onto the stage for their ‘How about another round?’ UK tour! But before the Texan’s pop punk madness commences, tonight’s support is geared up and waiting to get the crowd all set for Bowling Four Soup! 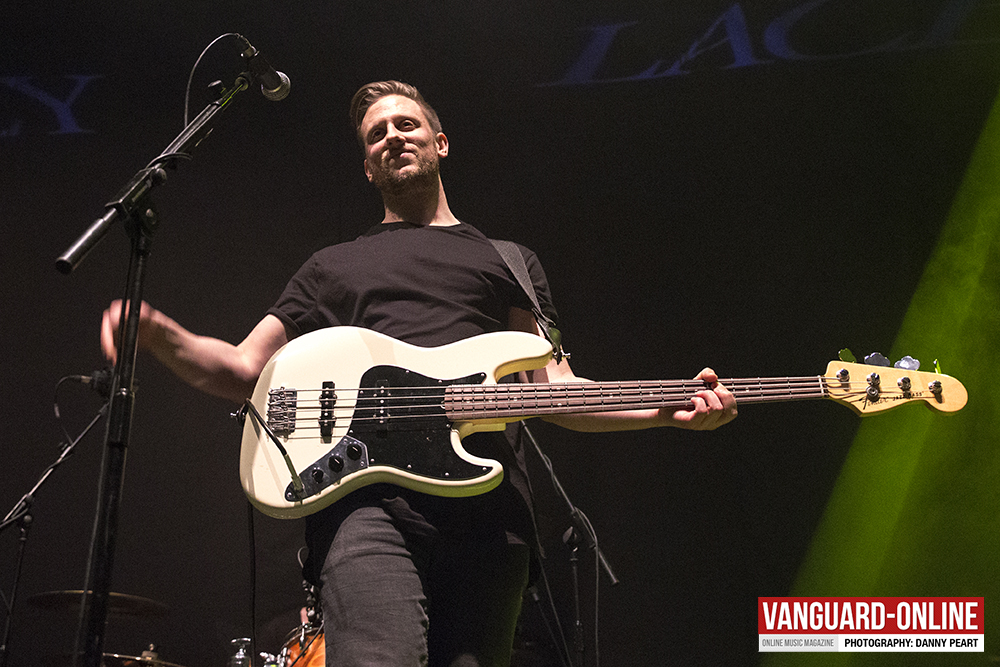 Having just announced a UK headline tour and their brand new E.P ‘I Don’t Owe The World A Thing’, Lacey (7) are keen to impress. The alternative rock band brings a steady start to the show to welcome fans into the venue. They aren’t quite what you would expect to hear based on what’s on the menu with tonight’s punk rock overload, but it’s a refreshing start and something that brings some diversity to the nights music.

The band look and feel confident on the academy stage, and it comes across clearly with their stripped back cover of Blink 182’s ‘Dammit’, which on paper shouldn’t really work, but these guys walk their way through it like it was their own and it’s surprisingly brilliant.

The Nottingham four piece play through a short set of both sing along rock songs, and moving melodic tracks well worth a few lighter moments from the crowd. The joint vocals between front man Graz Turner, and guitarist Josh Lewin sound fantastic throughout, but it’s ‘Shadow’ that became the stand out songs of the set with it’s huge chorus which the crowd can’t help but sing along to, especially with the front man encouraging the early turn out to test their vocal chords before they finish up. Overall a tight performance from Lacey who leave the stage to a wide well earned applause, and likely a fair few new fans too. 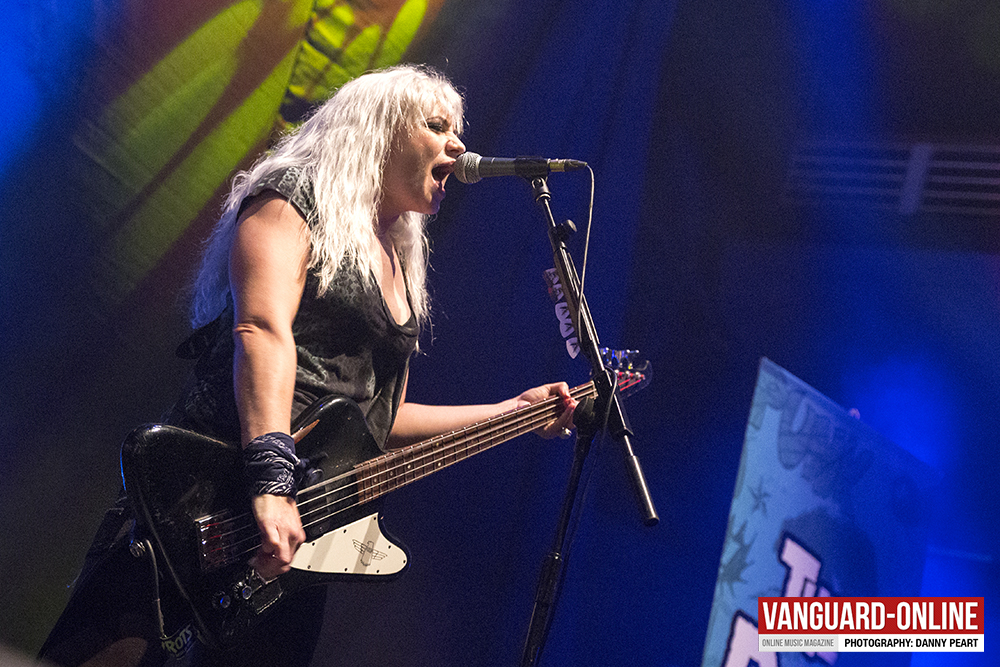 Interest arouses as the stage set up for The Dollyrots (8) takes place with bright blue banners and backdrop, proving they are out to make more than an impression by ensuring everyone remembers exactly who they are after the show.

As you would expect from the American three piece, The Dollyrots don’t hold back. As soon as they take the stage with their pop punk filled set they have everyone jumping along. The likes of ‘Twist Me To The Left’ is perfect for the crowd to bounce along to without the need of much motivation, and guitarist Luis Cabezas also can’t help but join in on the fun from time to time.

These guys are by far more suited to support Bowling For Soup with their fun energetic punk rock, and comical character finding the band bouncing jokes between songs with each other and the crowd throughout the set. This is the first time we have seen The Dollyrots, but we we’re overly impressed with their arsenal of punk rock.

Watching them we can’t help but think of The Subways meet Green Day when we here tracks such as ‘My Best Friends Hot’ and in particularly ‘Get Weird’, with it’s drum driven and progressive verse, leading to the upbeat chorus sang with attitude by front woman Kelly Ogden.

The Front woman even brings out her child onto the stage to give us the mic check, before she describes him as the “most rock n roll baby ever” due to being up until 4am on tour because of the time difference!

The Dollyrots close off their set with a strong bold performance of the golden oldie ‘Because I’m Awesome’ which leaves everyone well and truly warmed up for the madness that Bowling For Soup are set to bring to the stage.

The surprise package of the night, and we certainly will be keeping an eye on The Dollyrots from now on! 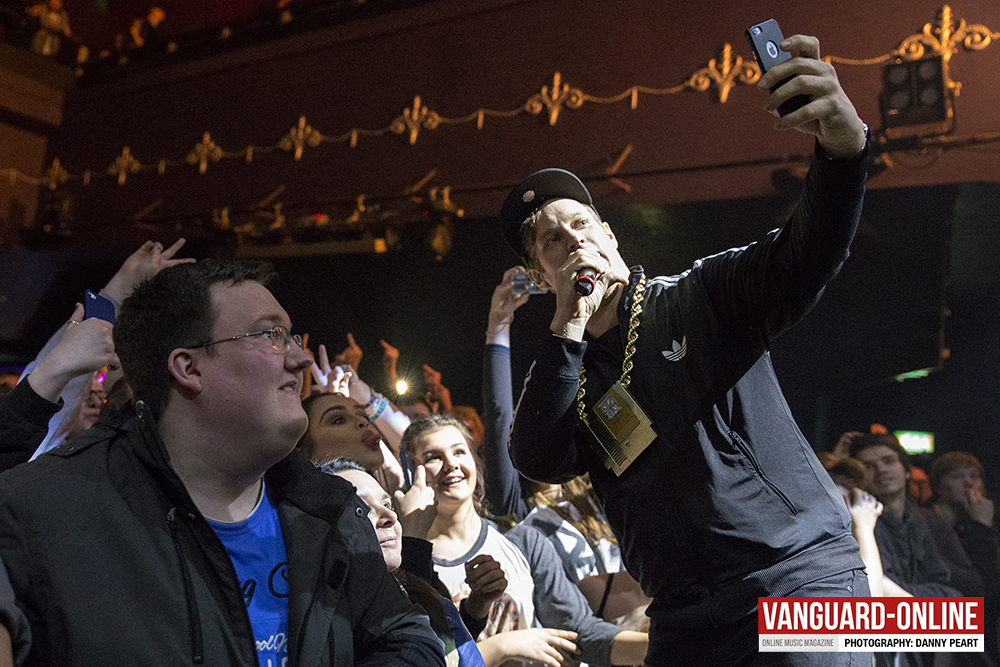 Dotted about between the sets of Lacey, The Dollyrots, and Bowling For Soup, MC Lars (6) appears for a few random appearances on stage to keep the Leeds crowd more than entertained as the stage is set up for the next band. He’s the perfect extra for the tour, as he brings a few comical moments keeping the crowd awake and involved, and even bringing a fan to help rap along to ‘Mr Raven’ onstage.

He also later asks the crowd to pull something random out of their bags and pockets to help him do a random freestyle across the barrier, which ends with him calling somebody’s mum on stage over the microphone.

It seems that looking back were more so impressed with his character and stage presence than his actual music, but based on entertainment value, MC Lars did a pretty good job of making sure things never died down! 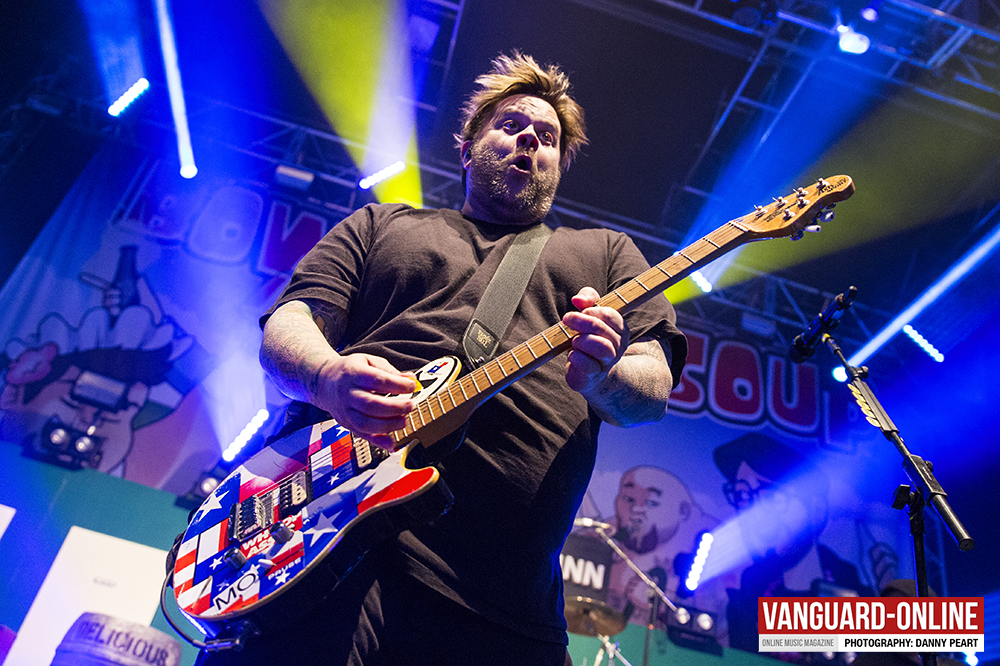 Nothing could quite prepare us for what Bowling For Soup (8) would have in the bag for tonight’s show, but it’s not long after MC Lars leaves the stage that the curtain drops to reveal a stage built for madness. A mock up pub with it’s own bar, dartboard, beer kegs, and spinning lights surround the kit for the band to play around to both keep us and the band entertained all night long.

The fantastic ‘Bitch Song’ is the chosen track to get things underway tonight, and it has the set moving on the front foot. Lead vocalist Jaret Reddick struts his stuff around the center stage as everyone goes crazy in the crowd, and lurking behind him is lead guitarist Chris Burney, who seems to spend more time trying to perfect the art of flip his plectrum off his elbow into the air and catch it than anything else (But it was quite impressive once he managed to pull it off a few times!). 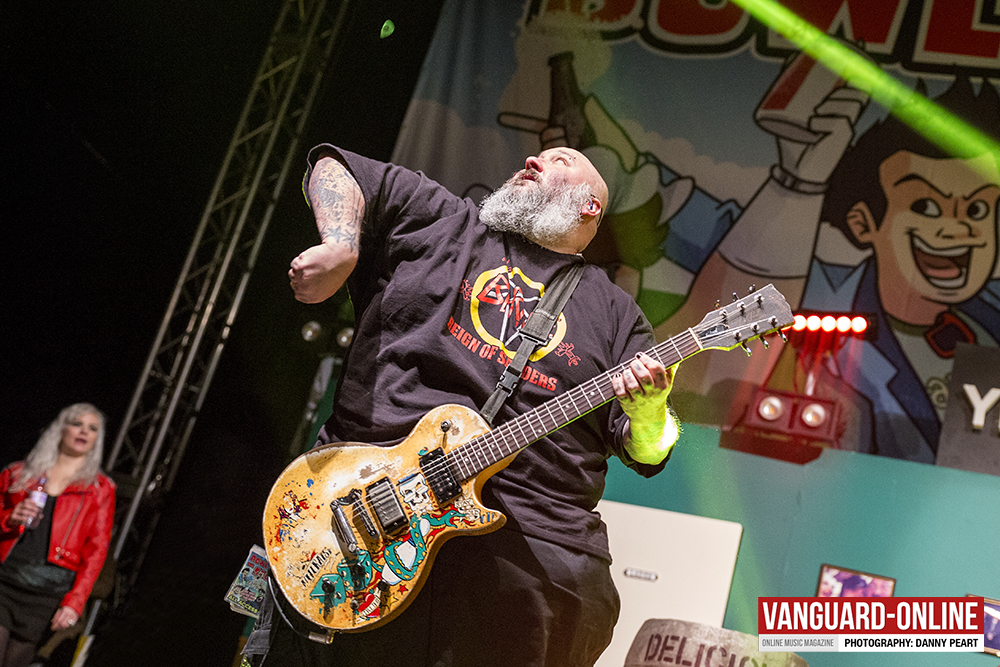 After a flying start, everything stops mid song in ‘Ohio (Come Back To Texas) rather strangely, as from what we could tell everything sounded great, but Jaret Reddick found a problem with the PA system which he claims broke due to them rocking too hard! For a further five munities or so, nothing really seems to happen apart from the band gathering at the pop up bar to knock back a few beers while someone solves the problem, leaving the crowd in limbo as the band stand stage side looking concerned awkwardly waving and smiling at everyone.

Eventually the show starts up again but doesn’t really manage to reach the impact it had from the start, until an outstanding performance of ‘Punk Rock 101’ picks the night back up into fifth gear with the crowd loosing their minds to the bouncy contagious chorus.

The set drives on with the likes of ‘Friends O Mine’, ‘I Don’t Know, and a rather special performance of Turbulence’ which has the Academy lit up as bright as the streets of Vegas by lighters and mobile phones, as Jaret watches on armed with his acoustic guitar. However it’s moments like that in ‘1985’and ‘High School Never Ends’ which are by far the crowd favorites, and notch the show up to overdrive as soon as the first notes ring out from Chris and Jaret’s guitars.

Another moment of randomness to the delight of the crowd was when Jaret pleaded “Pop Punk isn’t dead” and proved it by racing through a bunch of short cover songs turning the next fifteen minutes into a Pop Punk karaoke night!
The band fly through tracks such as Blink 182’s ‘all the small things’, Green Day’s ‘basket case’, New Found Glory’s ‘my friends over you’ and many more, before a fantastic full cover of ‘Stacey’s Mum’ by Fountains Of Wayne, which you wouldn’t be excused for thinking it was their own after such a convincing cover from the Texas four piece. The Dollyrots also return to the stage to play ‘love ya, love ya, love ya’ aside Bowling For Soup that is greeted with cheers all around!
Aside from all the rocking, Bowling For Soup have a great stage presence and have a real connection with the crowd. It rubs off on everyone as they joke with each other throughout the set, and have a few extended breakdowns to have the crowd singing along to keep them on their toes and well entertained. 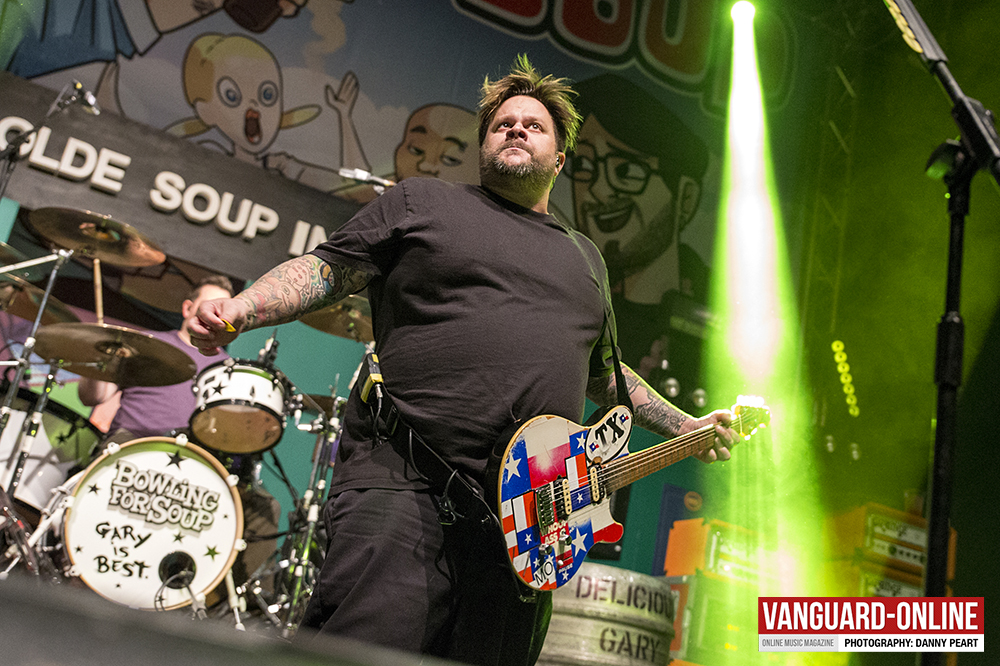 The predictable encore featured ‘Shut Up and Smile’ which warmed back up the crowd after a short break of chit chat, but ultimately there has been one song that everyone has been saving that little bit extra for, and that was for the set closing super hit ‘Girl All The Bad Guys Want’ which is introduced as the best rock song ever by the frontman himself. There would be very few people in the moment who would disagree with that statement, as the whole of the academy floor is bouncing, drinks are flying, and chaos breaks out to end the night in the highest possible way.

It may not have all gone to plan tonight with sound issues, Chris’ amp blowing up late in the set, and postponements throughout, but Bowling For Soup managed to recover well from the setbacks and prove why they are still one of the few bands left flying the flag for Pop Punk!