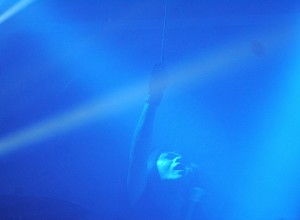 Boris have the capacity to astonish. They open the set with an accordion. I never thought I’d hear distorted accordion feedback, especially in a band that also have a huge gong. And so they set up for a full set of barely-distinguishable, massively over-loud doomy sludge and I love it. Hidden in cloaks, smoke, gloom and strobing beams, this decades-old band produce a monstrous and monotonous noise. It reminds me of when I first tried a little combi amp and realised I could turn up the gain and sustain to make a chord last for minutes. It’s a joy. 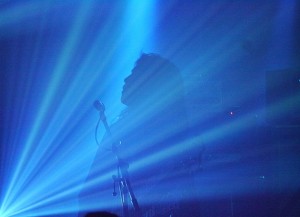 My chest is trembling at the granular volume as almost-static chords hang above drum beats. Volume bludgeons in a lumpy drone. A guitar solo sounds like a wasp trapped under a glass. The drummer rises and points his drumstick at individuals. The double neck guitar drifts into the white beams and casts dark light through the room. It is terribly serious and gloriously ridiculous. My eyes are hypnotised by the lights and I am in a trance state. An hour and a quarter pass by very quickly. 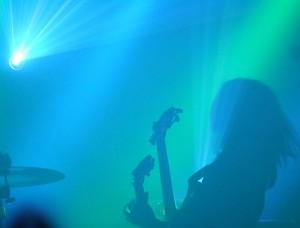 By contrast, with Amen Ra, time drags. Their hour-long set is very serious and the songs appear to have some meaning that I can’t decipher and they do that quiet and sensitive / skull-crushingly loud / quiet and sensitive thing. After a couple of tracks I realise they all have the same pattern. Boris sounded more or less the same throughout but that was the joy. Here, the alternation marks the slow passing of time. That said, I was in a minority, since many heads were rocking back and forth with the huge riffage.

Either way, whether you liked one band or the other better, no-one could argue with this amazing double bill – just one of these bands would be a major night out. 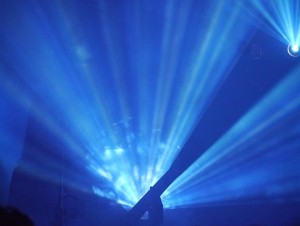