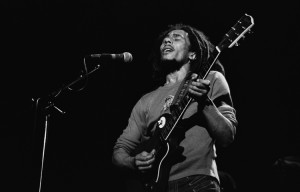 The year is 1978. Bob Marley and the Wailers have released what can now be identified as four iconic albums in short sharp succession; both Catch a Fire and Burnin’ in 1973, Natty Dread in 1974 and Rastaman Vibration in 1976. Bob Marley and the Wailers, Easy Skanking in Boston ’78 contains the coverage of previously un-released material from their concert on June 8th, 1978 at Boston’s Music Hall. Material from both Burnin and Natty Dread feature heavily throughout the set, with tracks such as, ‘Burning and Looting’, ‘Get Up Stand Up’, ‘Rebel Music’ and ‘Them Belly Full’, as evidently popular with the audience. As one of the earlier of the 52 concerts of the tour, this record noticeably boasts energy and enthusiasm and the listener can expect to feel a whirlwind of emotions when listening to it; from rebellious to romantic, from joyous to revelatory. It was just two years previously, in 1976, that the attempted assassination of Bob Marley at his home in Kingston occurred. One year later in 1977, Marley discovers that the cancer developed in his toe had spread to the rest of his body.


It is important to remember these moments as they form the mould in which this distinguishable performance in Boston is set. The show begins with the steady and meditative ‘Slave Driver’ with bubbling keys and the floating harmonies of backing vocalist, the I-Threes. The political voice of Marley is noticeably prevalent throughout the first third of this album. The bassline-heavy ‘Burning and Looting’ with its deep, striding charge follow on from the first track. Marley gasps that, ‘I was a prisoner too’ in his song of loss of freedom, entrapment and determination to overcome. The energy and attitude continues to flow steadily into, ‘Them Belly Full’. The backing singers chant in harmony as Marley demands his crowd to, ‘…forget your sickness and dance. Forget your weakness and dance.’ By the sound of the audience, they oblige to do so willingly.


While ‘I Shot the Sheriff’ is a track most frequently recognized for its light and poppy studio-recording, this live version serves as a strong contrast and is a highlight of the album. With heavy, thundering symbols and a gospel-like organ, this track is laced with funky influences, bringing to mind the Meters’ instrumentals in ‘Fire on the Bayou’ or ‘Cissy Strut’, demonstrating just how innovative the Wailers were as musicians; fusing rock, funk and elements of the blues with reggae.


Another highlight is ‘Lively Up Yourself’. Once again, the steady, funky flow is prevalent, reminiscent of Jamaican reggae guitarist Ernest Ranglin with his solo album, ‘Below the Bassline’. ‘Lively Up Yourself’ is noticeably less structured than the previous tracks. Marley has become emancipated throughout the set. He has become grizzly, wild and free and his energy is less absorbed by anger and strife of the more political tracks in the first part of the set. The informality and the ease of this track is heady and enjoyable and is for me, one more highlight to the album.


By the end of the set, the energy has risen and the heaviness of the heat and sweat which hangs in the Boston arena travels through my headphones blissfully. The audiences’ appreciation for the band in the final throes of ‘Jammin’ reveal the true effect that this performance had on the lucky crowd at the Boston arena in ‘78 and it is by this point in the album that I realize I have a huge smile on my face.


After listening to this momentous album on countless repeat, I remain true to my belief that a live album has a power like no studio- recorded album can ever have. If you have ever wished that you could time travel back to your favourite concert in history then start your journey here. This is an incredible recording of a moment in history which will never be forgotten, and an album which promises over more than anything, to satisfy the soul.