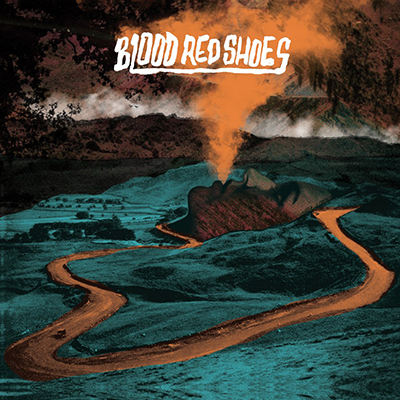 Upon hearing the eponymously titled new album from Blood Red Shoes before doing a background check on the band it was clear to me what influenced the sound of this two-piece from Brighton, England.

After hearing said album and researching the band, it wasn’t at all surprising to see Pixies, Sonic Youth, Queens Of The Stone Age, PJ Harvey and Fugazi cited as influences of the band.

‘Welcome Home’ quickly made me reminisce about my days of being hooked on fuzz distortion drenched garage rock and 90s grunge – the main guitar riff not sounding too dissimilar to that of ‘Aneurysm’ by early 90s grunge giants Nirvana.

‘Everything All At Once’ mimics vocalist/drummer Steven Ansell’s notion that this album was all about being “hedonistic and free”.

After 2012’s “too perfect sounding” In Time To Voices, Blood Red Shoes decided that to capture the “imperfect” essence of the band’s sound, no producers, engineers or A&R big wigs were required and to this end the band drove to Berlin and locked themselves away, recording the album completely by themselves and on their own terms.

The decision to deem any ‘professional’ technical expertise unnecessary during the recording process of a commercial release was definitely a risky move but one that has allowed the band to produce some of their finest work. Ansell said it best when he described this album as their “rawest, heaviest, sexiest and most confident yet”.

The raw, low budget qualities of songs like ‘An Animal’, ‘Far Away’ and ‘The Perfect Mess’ have been authentically matched with an equally low budget visual representation of where the band’s collective minds are at with a music video for ‘An Animal’.

The band gives thanks to an “element of luck” for reaching the milestone of their fourth album (which is a milestone in music’s modern age), however after listening to Blood Red Shoes I’d have to say it’s a little more than that, they deserve to be touring the world and should (and I’m sure do) relish the fact that they are able to do so.

Songs to check out – “An Animal” and “The Perfect Mess”.