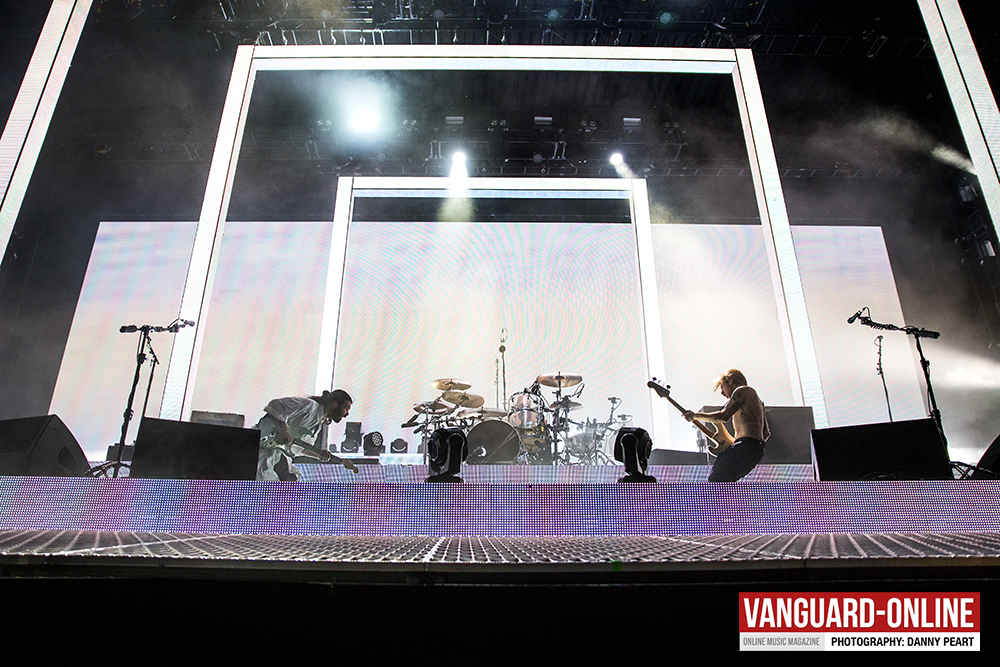 Having seen an explosive end to Biffy Clyro’s set at Leeds Festival in the summer, we were left bitterly disappointed to not have seen the show from the start. But luckily for us Biffy quickly announced their return to Leeds in the fall, and we knew we had to make damn sure we was there! Finally tonight at Leeds Arena, we get to see Biffy Clyro from start to finish on their UK headline tour to see out the year with a bloody brilliant rock show.

First things first, it might not be as huge a stage and crowd for them to take on in comparison to their Reading & Leeds sets, but it doesn’t stop them from cramming in their enormous stage set up! As the room fills up we are faced with massive LCD squares set back into a slanted stage, with multiple platforms for the band to rocket around. It looks impressive enough, but as the band appear to deafening cheers and drop us straight into ‘Wolves Of Winter’, blasts of light and colour beam from the overpowering stage behind the sound of distorted guitars and thunderous drums. After all, this is a Biffy Clyro show, so we should expect something special! 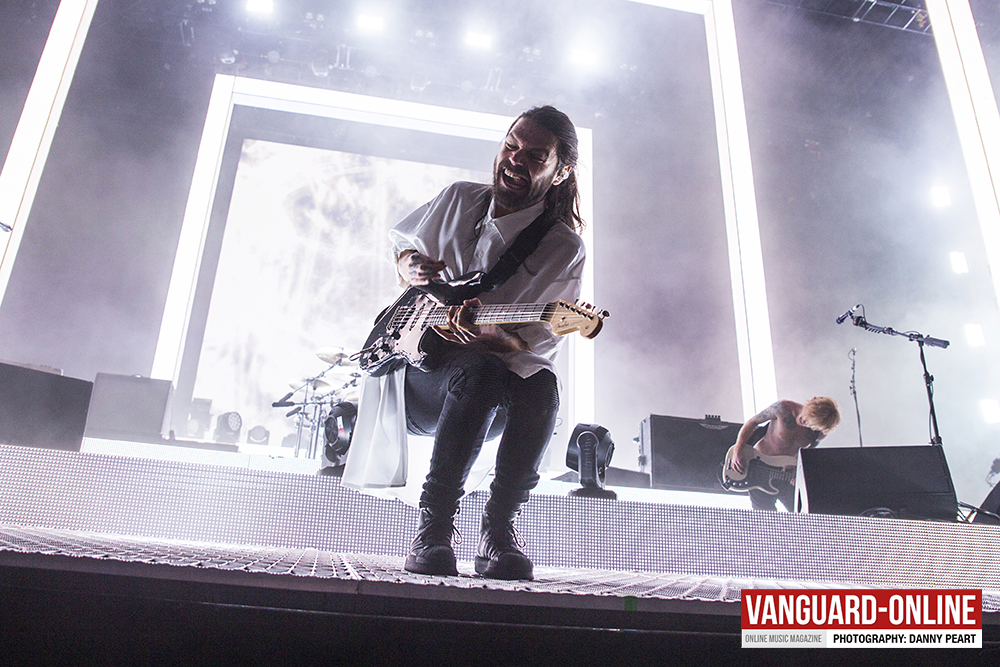 It doesn’t take long at all for the frontman Simon Neil to wander down to the front of the stage for the fiery ‘Living Is A Problem’, whilst pulling all sorts of faces to the fans at the front as he thrashes out the bursting intro. It may be one of their older tracks, but it’s certainly always one of their best live, and tonight is no different!

Having kicked off the show in true Biffy style, the lads crack out the recent ‘Howl’ to have everyone singing and clapping along to one of the bands newer tracks from their recent release ‘Ellipsis’. Even though tonight may be a tour based of the back of the new album, it’s hits like ‘Bubbles’ and ‘Golden Rule’ which get the biggest refraction from the Leeds crowd, and to be fair, they are deafeningly fantastic live.

From here on we’re taken on a journey through the past decade of Biffy Clyro’s mainstream success of hits from album to album. From the guitar belting frantic ‘Animal Style’, to the moving ‘Many Of Horror’, every track is performed with as much enthusiasm and passion as the last. ‘Medicine’ has the frontman take to the centre stage alone armed with his guitar to strip the set back temporarily for a rather beautiful moment, before some curtains drop down from the towering stage behind Simon for a fantastic acoustic performance of ‘Machines’. 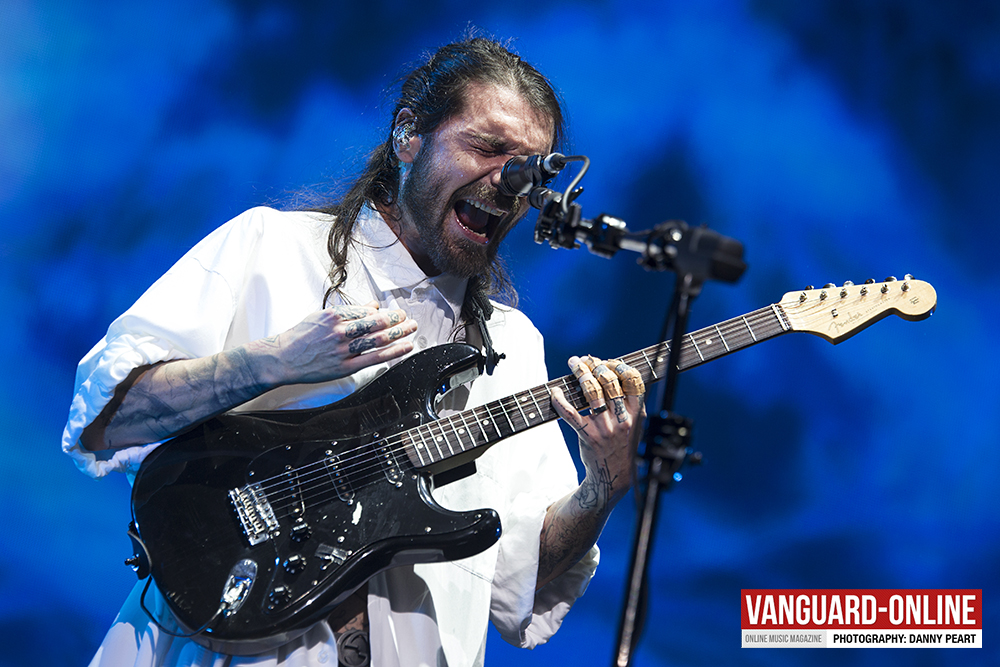 The chants of “Mon the biff “ echo through the arena to encourage an encore, and we’re not left disappointed. The stage explodes into the rowdy ‘Captain’ and has the floor bouncing along with the band on stage. As the set comes to a close, we’re left wondering where the past couple of hours went? Not a moment sailed past in Biffy’s twenty-seven song strong set where we were left bored or unfixed from the stage, and there’s not many bands who can put together such a breath-taking set with such ease and character.

One last blast from the past with ‘Stingin’ Belle’ for that explosive finish from the trio and we’re all left more than satisfied. Biffy Clyro are on the top of their game, and with a headline slot at Download Festival next summer, they don’t look to be disappearing any time soon! 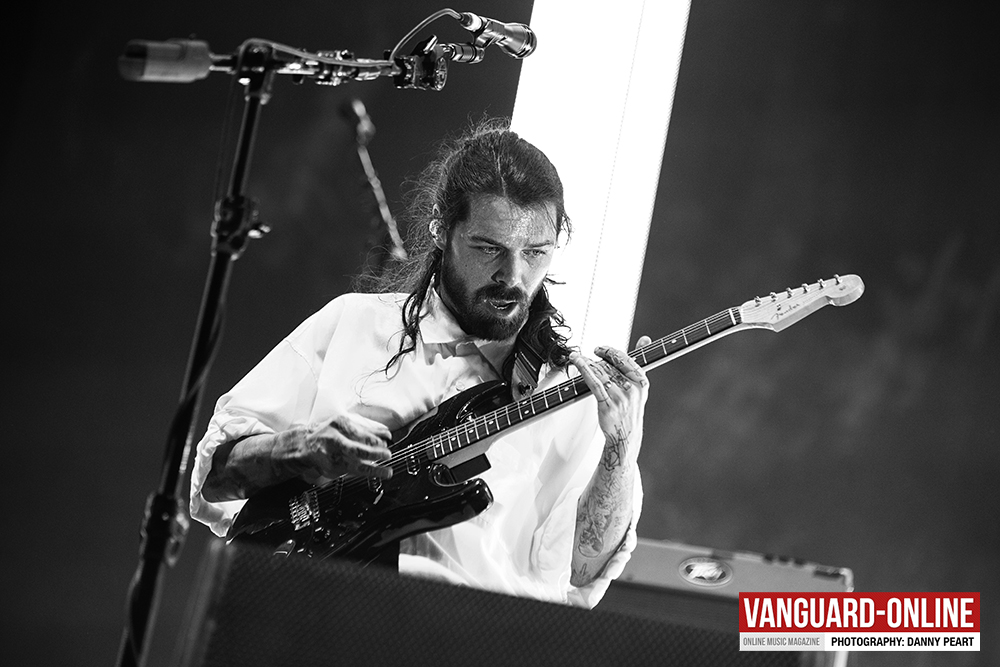