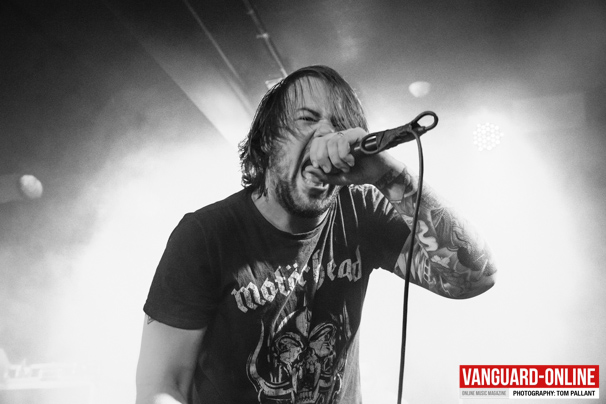 If anyone was ever wanting to break the record for the largest amount of red flannel shirts in one place, they’d struggle to find a more fitting event that tonights Beartooth show at the Manchester Club Academy. After a very last minute venue upgrade due to Motionless In White cancelling their European tour, they still managed to completely pack out the 650 cap’ venue.

Opening the show are British hardcore-punks Blood Youth. Having only formed in early 2015, they’ve already released their first EP “Inside My Head”, just finished recording their second, had their own headline tour, and now on tour with one of the USA’s biggest hardcore. It’s fair to say they don’t mess about! Kicking of their set with “Dead Space” taken from their first EP, echoed instantly by the hardcore BY fans already starting what is set to be one of the many circle pits tonight. 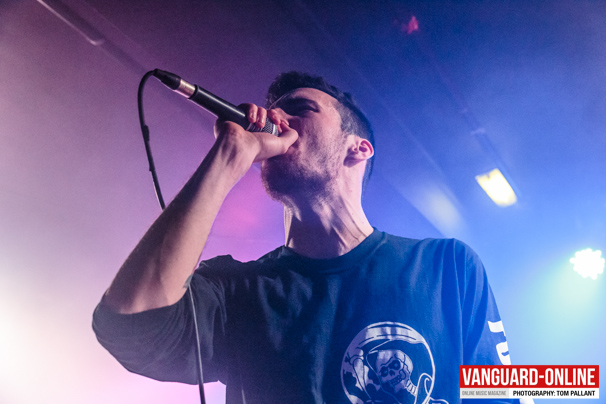 With their second guitarist Sam Bowden currently filling in for Lloyd Roberts of Neck Deep on their US, and now UK tour with Bring Me The Horizon, the (usually) 5-piece break sensationally from heavy hardcore breakdowns to melodic choruses with frontman Kaya Tarsus’ excellent vocal ability at the forefront. With the majority of their set coming from the debut EP, a new tune “French Exit” gives us a bit of a taste of whats to come soon from these guys, and if this song’s anything to go by, it’s going to be pretty special. As if the humble but committed BY following weren’t moving enough, Tarsus screams “I need you to open this place up, lets what Manchester can do with a f****** breakdown!” before smashing into the breakdown in “Big Smoke” with what’s easily their biggest and most emphatic of what they’ve released so far.

It’s what everyone who’s heard of BY has been waiting for, it’s the first single of Inside My Head, it can only be “Failure” and I can’ think of a better way to close the set. As Tarsus makes his way on top of the barrier and screams at the fans below they do exactly the same back before (again!) throwing themselves at each other in what has now grown into a nearly full venue, and it’s a good job that the majority of people have been fortunate enough to witness the incredible ending to the set. These guys are set for a big 2016! 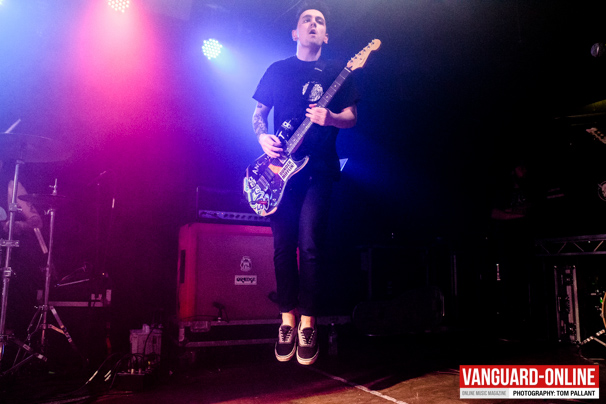 In a time when concerts are being targeted by terrorists, it’s amazing to see the community n music that this can create, the throng of Beartooth fans now packing out the academy all united in a time when the music industry is hit hard. The extra security put in place tonight just reminds us of how careful we may now have to be. Even with this situation overhanging the show, the spirit is in no way dampened as the band finally emerge from backstage to the loudest roar yet from the Manchester audience.

With a set drenched in new material from their latest album “Disgusting” and with little speech between each of the songs they try to cram as many tunes as they can into their slot. In such a small venue, the crowd noise bounces off the low ceiling creating all almighty noise almost matching the band’s onstage level. Frontman Caleb Schomo who also recorded, engineered and produced their entire album, never stops moving making the most of the limited space he has darting in and out of the other 4 fellas in Beartooth, and honestly he’s not the smallest guy in the world, the lumbering gent from Ohio moves with an incredible speed and ferocity. “Beaten In Lips” is a personal highlight, although the themes reflect what have become the standard in this type of genre as an “anthem for the broken kids” it doesn’t stop it being an incredibly driven track cueing the crowd to go pretty f****** mental! 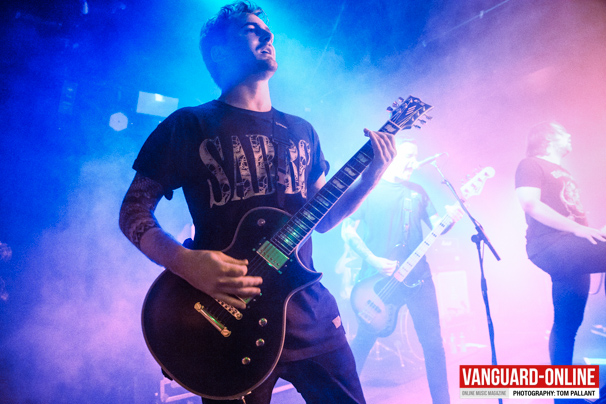 The amount of sweat and tattooed arms flying about is just staggering but clearly not an issue for those involved as the odd perspiration covered teen staggers to the bar for a bit of rest bite between songs. The main reason I mention this is as the opening riff to “Relapsing” is heard coming through, one of the “said teenagers seeking rest bite” screams, rolls his eyes and jumps straight back into the middle of a circle just showing how much of a great show these guys put on. “Here’s one from a bit deeper on the album” Schomo shouts before the inevitable intro chants for “Keep Your American Dream” fill the, what feels like, small venue. For a song that’s pretty deep into the album, a lot of people may not have delved that far through Disgusting, it’s very much a case of all killer, no filler with this record and this just proves it.

The age old ‘let’s go offstage and pretend we’re not going to play our biggest song’ shortly ensues as the “BEAR-TOOTH” chants grow louder and louder until surely enough they emerge to throw the opening lyrics to “Body Bag” into our faces, causing the entire room to shake with the weight of the biggest circle pit yet surely causing justified concern for the structure of the building, but no one cares because this is Beartooth in Manchester. On what seems like a fairly brief UK tour, Beartooth have clearly made their mark on Manchester this evening, and I personally can’t wait until they’re back again. 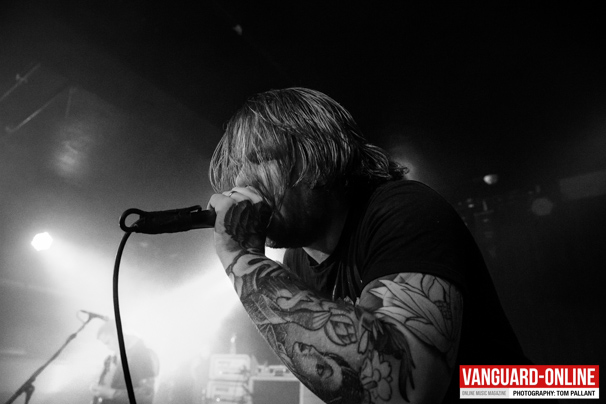