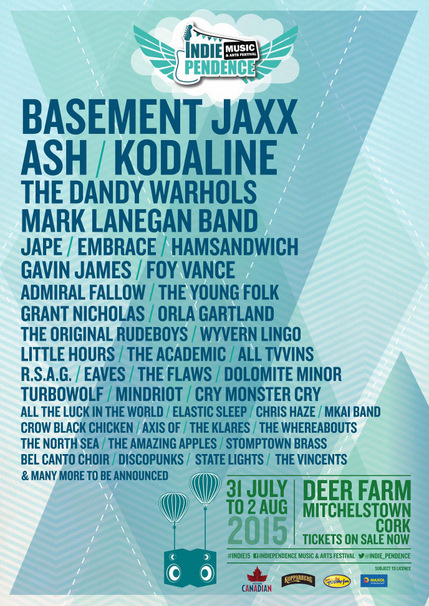 BASEMENT JAXX and KODALINE joined the headline acts for the Indiependence Music and Arts festival taking place from July 31 to August 2.

They bolster an INDIE15 lineup that sees the likes of ASH, DANDY WARHOLS, MARK LANEGAN and Irish festival staples JAPE and HAMSANDWICH headlining.

The Mitchelstown event has seen some big acts play it in the past including the Public Enemy, 2manydjs and the man that can do no wrong at the moment, Hozier.

The other acts are nothing to be sniffed at either, including EMBRACE, FOY VANCE, ADMIRAL FALLOW, WYVERN LINGO, and LITTLE HOURS, and previous INDIE favourites including THE ORIGINAL RUDEBOYS and ALL TVVINS will know how to work the crowd there.

INDIE15 will continue to announce more acts, including its comedy bill being prepared by Irish Comedian ANDREW STANLEY.

You can glamp in the event’s boutique ‘Podpad Camping’ facility, which is at a 10% discount until the end of April, and in the beautiful setting at the foothills of the Galtee Mountains it’s something to make the most of.

Early bird tickets sold out fast for the 10th Annual Mitchelstown event, but it’s not too late to buy tickets; Weekend camping tickets for INDIE15 are now on sale for €109 and are available from the festival website www.indiependencefestival.com and tickets.ie.