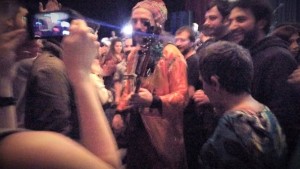 Shrouded by the smell of Turkish restaurants and amongst the neon signs advertising Efes, ‘Epic’ venue in Dalston was the natural place to host the Turkish underground psychedelica group Baba Zula. As part of the Europalia Arts Festival, the alternative group brought back its unique fusion of traditional Istanbul folk with modern electronica to London for the first time in 10 years.

Founding member and electro saz player Osman Murat Ertel lead the group into its beginning crescendo which climaxed with its entrancement of the crowd. With a simple message of unity and a warning that the enemy divides, bassist Can Aydemir had come to spread a philosophy as well as entertain and would spend the night breaking down some of the barriers that separate us. 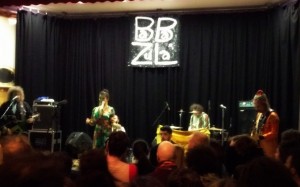 The band first broke down the dividing barrier between crowd and band by taking the show into the throng of dancing fans. The stage deserted, the band sat in the middle of the crowd demonstrating their instrumental expertise with primal beats and heady Oriental dub sounds, an affectionate display of their unifying mantra.

Most of the set was spent on the stage with the seducing vocals and hypnotising dancing of Melike Şahin. Together with Osman, Melike lead the crowd into singing the Turkish vocals in a wholly participated in attempt to break down the language barrier.

Their gigs in Turkey are often met with a crowd together in their radical ideals and distaste for the current government. Anti-establishment chants are often heard ringing out from their fans which are from a wide range of backgrounds. However the scene was much different in Dalston as the crowd spent the night dancing without inhibition as percussionists Özgür Çakirlar and Mehmet Levent Akman directed the psychedelic journey through the night. 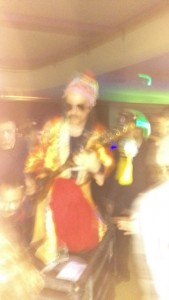 The encore ended with a final excursion into the crowd by frontman Osman this time atop a wheeled equipment case. Finding himself under a chandelier, Osman couldn’t resist the crowning moment swaying the gargantuan light fixture from side to side, anti-establishment music pioneer underneath playing out the final entrancing sounds as the security struggled to control the situation. The band took their bows as they left to continue their Europalia tour to Brugges and Brussels. Captivated revellers continued to dance until ushered out of the venue as an unforgettable night finally came to a close.