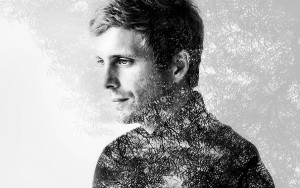 The 1st of April sees Awolnation playing their only UK date before they embark on an extensive tour of the US. The Electric Ballroom in Camden plays host, and as I arrive (fairly early) I’m a little surprised to already see a queue winding its way adjacent to the venue. Even as I enter I can’t help noticing the wide variety of audience members – from lads heading straight for the barrier to the older audience members who gathered more sedately on the fringes. There is a collective feeling of anticipation in the air.

Essex locals and indie-rockers Nothing But Thieves provide the opening slot and absolutely run riot with it. Lead singer Conor Mason is a vocal powerhouse with astonishing range; from deep growls to a beautiful falsetto his vocals add a polished, melodic feeling to the songs. Guitar riffs are well executed, drums drive but don’t obscure, and the result is a tight sounding band who seem to know exactly what they’re doing. Which is namely making a brilliant impression. Conor comes alive on stage, swinging about while his band-mates thrash around him. They look like they’re having fun, and they get an enthusiastic response from the audience, fist pumping included. Their set list includes highlights like ‘Itch’ – a perfectly crafted rock song that features more of Mason’s stunning vocals, and the atmospheric almost-rock-ballad ‘Graveyard Whistling’. Nothing But Thieves, like the pickpockets they are, have run away with our hearts. There are big things in store for this group in the future.

Awolnation take to the stage in what becomes a dramatic light show that extends over the whole evening. Aaron Bruno’s face is obscured as the electric pulse of lead single ‘Run’ from the latest album of the same name rolls out. Whatever impression you have of Awolnation from listening to their records – just forget it. This band live is a completely different beast – and I used the word ‘beast’ specifically because their performance is a feral thing. Live they are much heavier than their recordings let on – they bend over their guitars like madmen and Bruno’s voice tears from smooth to hard-core frequently, stirring up a frenzy in the audience. On paper, perhaps, Awolnation shouldn’t work. They combine elements of rock and electronica, synth and guitar in ways that sound bemusing until you actually listen to them. Live, however, you are told straight away that they are a rock band. There is no doubt that their crashing guitar riffs take centre stage.

From the minute they begin to play Bruno’s voice is accompanied by hundreds of others. It seems to make little difference whether they’re performing songs from their debut Megalithic Symphony, or their latest offering, Run; the response is just the same. Old track ‘Not Your Fault’ is a belter and has the audience matching Bruno scream for scream. The genre-bending new track ‘Windows’ sounds even more powerful in person – especially when there’s uniformed chanting of the opening line ‘off with your head / off, off with your head!’ What I notice most about the gig is Bruno’s seemingly magical connection with the audience. Without really saying too much, apart from checking they are okay after a particularly energetic guitar solo/mosh session, he has them eating out of the palm of his hand. During ‘Burn It Down’ he tells the audience to crouch down ready for the explosive chorus – and literally everyone does. ‘All I need’ sees audience members linking arms with the strangers next to them too, at Bruno’s request. I feel like I’ve walked in on something of a cult meeting, everyone seems so in-sync. The bands pure energy and enormous endurance leaves me in awe – guitar solos turn into epic jam sessions, and Bruno is on his feet and dancing the whole time. There is even a furiously stamped request for an encore and the band emerge once more to play fan favourite ‘Sail’, the swelling, menacing synths and fuzzy guitar sending everyone a little crazy one last time. By the end of it all even I am exhausted, but undeniably now inducted into the Awolnation following.

Run is out now on Red Bull records.