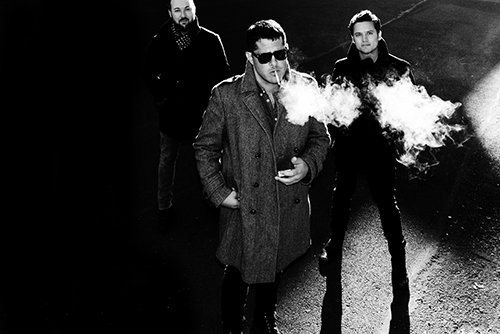 It’s taken Augustines three years but they return to deliver their self-titled second album ‘Augustines’. It’s a fresh beginning for the American three-piece after some tragic circumstances and has since made them work harder, focusing on their music.

It seems the hard work has paid off as they unveil a truly inspiring album, which will have the hairs standing on the back of your neck. The passion, positivity and pure beauty of this album is as uplifting as it is satisfying to listen. From track one to finish you are deeply cast under the magnificence of these individual heartfelt anthems.

The emotive rawness of singer Billy McCarthy just breathes authentic prowess, whilst easily appealing to a mainstream status. The rhythmic beats of ‘Cruel City’ integrated with a taste of some exotic genres and beautifully constructed vocals make for an atmospheric masterpiece. ‘Nothing To Lose But Your Head’ follows and already setting you on the pedestal expecting to fall, they’ve taken you to another level and showed their stadium-sized ambitions.

‘Weary Eyes’ is another one to remember, as is its follow up ‘Don’t Look Back’ keeping the album flowing the way you’d want. But just as you begin to cast them off as a one trick pony, they bring it sooth it down with the gentle piano and vocally led ‘Walkabout’, which shows an alternative side to singer McCarthy and builds into remarkable anthem. Maybe a little less emotionally powered as their debut album ‘Rise Ye Sunken Ships’, it is still a credit to the American Indie rockers and is pushing them in a positive direction.

With hints of Bruce Springsteen to U2 and even increasingly popular Imagine Dragons, Augustines are showing a new side to them that is definitely worth having a listen.