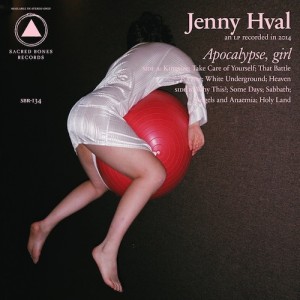 What comes to mind when you think of the apocalypse in music? Perhaps some scorched earth post-rock? Black metal? Bloody Muse? Well here’s something completely different.

Norwegian recording artist Jenny Hval has returned with a towering, daunting piece. The end of something is nigh. ‘Apocalypse, girl’ is a work that needs to be tackled as a whole, like a movie or a novella. That’s not to say there aren’t great stand-alone tracks. Opening track, the spoken word ‘Kingsize’ throws down the gauntlet. Phallic imagery, ‘capitalist clit’, expectations of a woman’s supposed role, implied then explicit sexuality. These are peeks at the themes that will pop up throughout the album. Amidst the strange, futuristic electronica it is Hval’s voice that dominates the album, inhabiting each song like an actor fills a role. She giggles, she howls, she whispers and reaches for the skies

‘Take Care Of Yourself’ sounds like a feminist reboot of Radiohead track ‘Fitter Happier’, coming across as a self help manual for happy drones. ‘Getting paid/getting laid/getting married/fighting for visibility in your market’. Hval almost laughs before her voices soars at the end of the line ‘not making a fool of yourself’. Musically, it is a mixture of playful lightness and foreboding darkness, a queasy effect that is employed throughout.

Lyrically, this is a challenging record. Lead single ‘The Battle is Over’ is the Trojan horse though, smuggling Hval’s ideas inside a shimmering, woozy pop song that at the same time declares ‘Feminism is over/Socialism is over/I can consume what I want now’. It is weirdly anthemic but the sarcastic sneer can still be imagined.

The intensity of the album peaks on the stunning ‘Heaven’. On an album where Hval seems supremely confident, a sliver of fear arrives in the whispered ‘ I’m 33, that’s Jesus’s age’. The song ends with a soaring vocal outburst, Hval in ascension, declaring ‘So much death’. It’s a bit of a showstopper.

Sex and religion jostle for room with feminism. Song titles include, ‘Heaven’, ‘Holy Land’ and ‘Sabbath’. The words ‘cunt’ and ‘cock’ abound, not for shock value but because that is what they are and the sound of them fit musically. You will need to give this album you’re full attention to understand the journey or at least try to. That journey ends, fittingly enough, in ‘Holy Land’. Is it America? Hval seems unsure on a soothing, lengthy track that feels like the sun rising over sombre procession. Hval sounds like she is awaking from a fevered dream or a shattering journey. Much like the listener.

‘Rewards repeated listens’ is such a Mojo thing to say but it’s very much the case here. Listen to some of the tracks here in isolation and the lyrics may just wash over, the lack of anything resembling a ‘hook’ might make it drift by. But once your ear locks into the ebbs and flows of the language, ‘Apocalypse, girl’ becomes thrilling and compulsive. It made me think of Scott Walker’s ‘Tilt’ and the recent release by Prurient, works with dark, opaque lyrics and that give the listener the thrill of wondering what is coming next.

Jenny Hval has crafted a shining, twinkling dystopia that is at times sensual, unsettling, fascinating and puzzling, often all at once.

‘Apocalypse, girl’ is released on June 8th on Sacred Bones