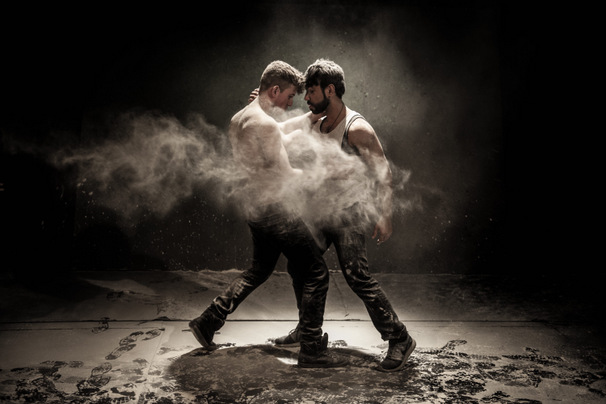 Seven young dancers take to a misty stage and roll in and out of each others arms for an hour at the Theater Royal Stratford East.

Smother is a show about relationships, the ins and outs, the ups and downs.

The dancing is sensual and tender, turning and twisting and occasionally athletic.

Its emotional too. The choreography and execution successfully conveys feelings of longing, of being lost in the crowd and the joy of finding someone.

It makes me think about my own children, and how they’ll fair in love as they mature. The heart can be a lonely hunter. Watching my children walking across the stage looking for someone to love makes me feel helpless.

The show reaches its high point in the first half hour when a woman manages to pick and seduce a mate from a crowd of passers-by.

Soon after, two dancers play out a time-series set of photographs depicting the various emotional stages that lovers commonly circle through as the months and years pass by. Its impressive.

This show is not overly sentimental. For every romance, there’s ambivalence, conflicted emotions and at the show’s end, disgust.

The show soundtrack seems to draw heavily on the singing of one female vocalist, Daughter, or on the singing of a lot of singers who all sound like Daughter. Daughter sounds a bit like Cat Power, I think I’ve heard her on television advertisements. The singing on the soundtracks is so tender, the lyrics so touching, and the music so moving, its difficult to work out who should take credit for the success of this show, the dance troupe, the producer or the musicians.

Whatever the answer, the combined effect of the music and the dancing was to permanently place me on the edge of tears.

Had the tears come they would have been warm tears, this show makes you feel good.

An hour of this was just right, I left feeling happier and lifted.