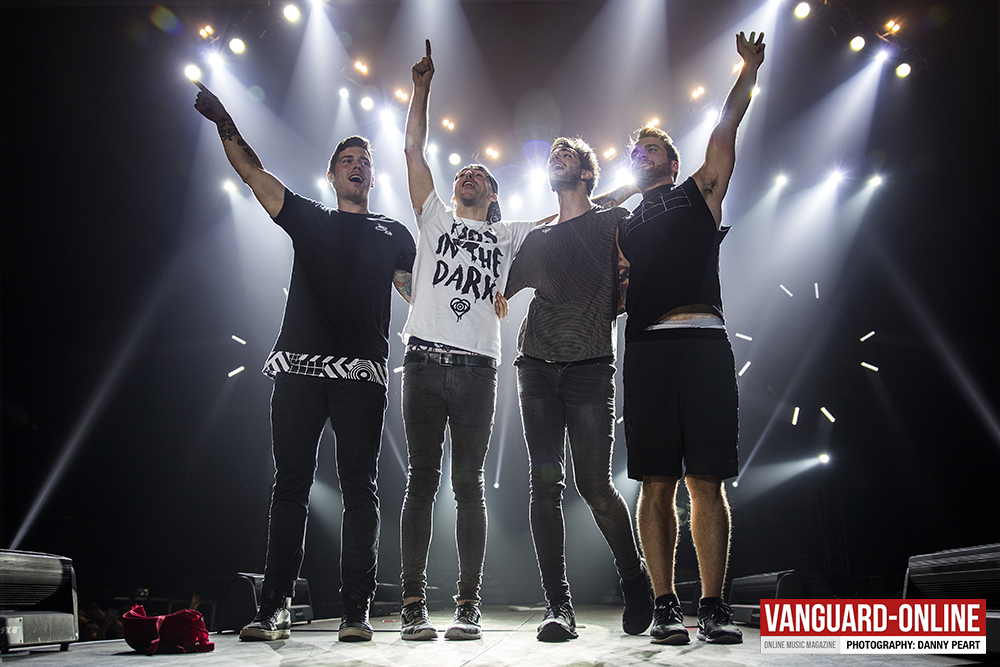 Since All Time Low started playing covers and writing pop rock songs in their basement in Baltimore way back in 2003, they must have at some point sat back in a daydream wondering how awesome it would be to play a full throttle headline show,on an arena stage like their heroes in Blink 182, Green Day, and Good Charlotte. But you can guarantee if you went back to tell them that they would one day headline Manchester Arena with Good Charlotte supporting them, they would probably have broken down in laughter there and then.

But tonight is for All Time Low at least, sold proof that hard work, persistence, and passion for what you do, can finally pay off and make those very dreams come true. 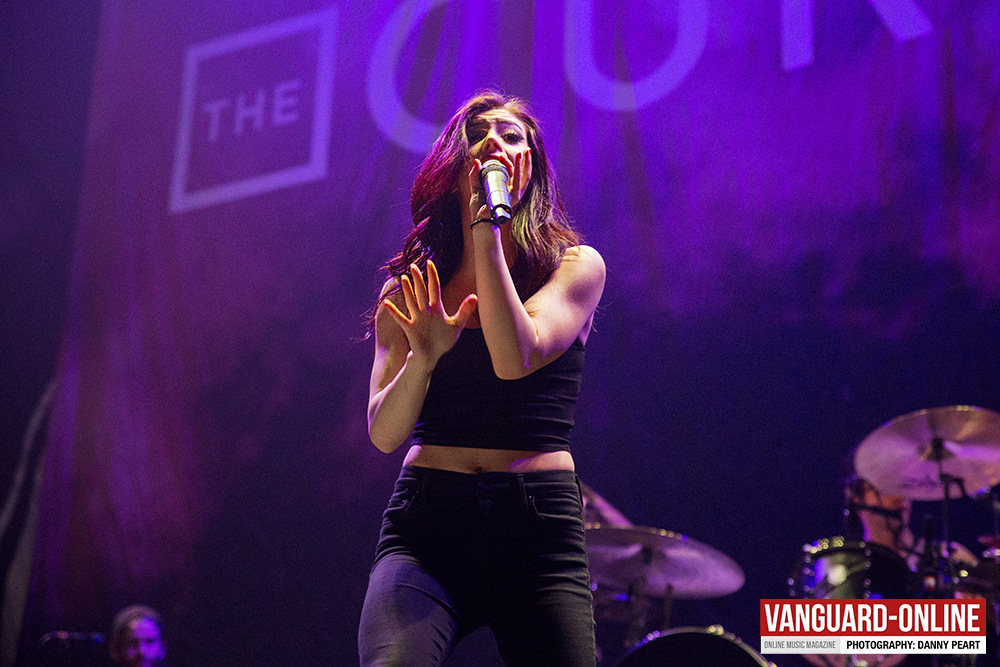 Tonight roughly 16,000 fans have turned up at Manchester Arena to take part in one of the biggest moments of the bands lives, and kicking off the night is Against The Current (7). The Poughkeepsie (NY) three piece take to a dauntingly large stage throwing themselves straight into a short set of pop rock, perfect to warm up the early and excitable turn out. They begin with their brand new track ‘Running With The Wild Things’, seemingly full of confidence as they make full use of all space available to ensure the crowd are jumping along to the bouncy chorus across the barrier.

Front woman Chrissy Costanza might be tiny, but she certainly packs a punch with her bellowing vocals and pop rock attitude creating quite the stage presence throughout the set, particularly in the opener ‘Running With The Wild Things’ and ‘Talk’. But tracks such as ‘Dreaming Alone’ and ‘Outsiders’ show they are no one trick pony and can carry a Ballard or two fit for an Arena sing along.

An assertive and stunning cover of Bruno Mars’ ‘Uptown Funk’ turns a few extra heads that linger at the back, before they dazzle them with their own super track ‘Gravity’, leaving the stage knowing full well a third of the arena are now Googling “Against The Current” to find out what else they have in their locker. 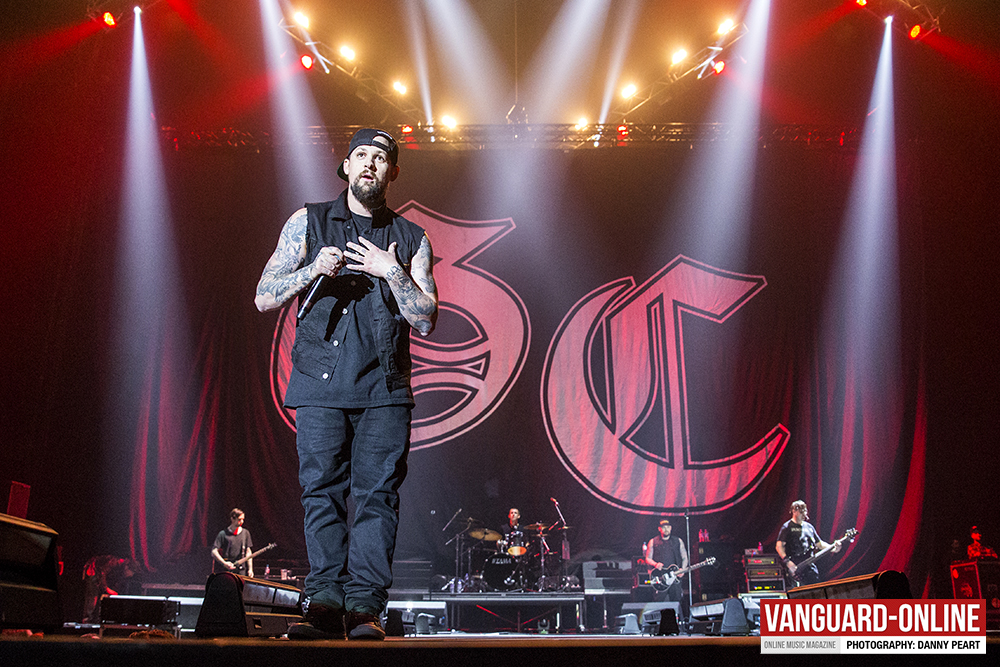 One band who definitely don’t need Googling however, is Maryland’s very own Good Charlotte (9), who are back and looking to make an impact after being under the radar for quite a while, especially in terms of live shows. So we’re expecting to see a performance which see’s the band getting back on their feet and possibly a rather sketchy at times performance.

How wrong we’re we? Rolling out to the fitting opener ‘A New Beginning’ Good Charlotte tear into the Manchester crowd showing no sign of weakness, as they power straight into ‘The Anthem’ which pretty much takes the roof off the Arena. It’s moments like this you realize why bands such as Good Charlotte reunite after disappearing for years, as thousands of people still completely loose their minds to tracks that were released well over ten years ago. The ten strong set list continues to power on in style with ‘My Bloody Valentine’ and the fan favorite ‘Girls & Boys’ which has the entire arena floor bouncing.

The reunion for Good Charlotte doesn’t however mean they are just going to play their old hits, they reveal they have been hard at work behind the scenes on a brand new album set for release later in the year, which front man Joel Madden further explains that they will be following it up with a UK tour, which goes down pretty damn well here to say the least.

New track ‘Makeshift Love’ gives us a teaser of what we can expect, and it’s packed with big riffs, a powerfully driven chorus, and plenty of sing along moments for the crowd to get involved with during a live performance, which arguably sounds better than the recorded version!

As you would expect, the lads close the set with ‘I Just Wanna Live’ and their old school breakthrough single ‘Lifestyle Of The Rich And The Famous’ that rocketed them to this very moment. We were looking forward to seeing what Good Charlotte had to offer, but now we’re itching for more. You’ll be watch them explode later this year everywhere weather you want to or not. 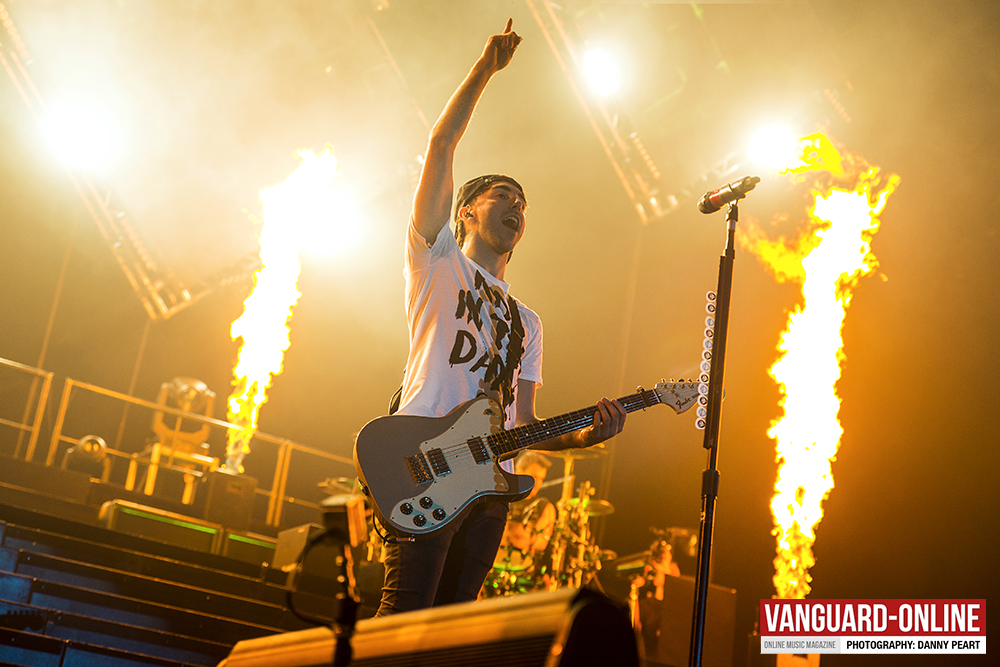 With Good Charlotte having set the bar ridiculously high, it would look as though All Time Low (10) may have well and truly shot themselves in the foot. But for a band that like to joke around not taking themselves too seriously, they find their way to rise to the challenge…

When the lights drop and the fan girls start screaming, the Baltimore four piece rise from the center of the stage under a spotlight to greet the ecstatic crowd, as they take to their formation to smash straight into ‘Kids In The Dark’, which turns the arena into complete and utter chaos. 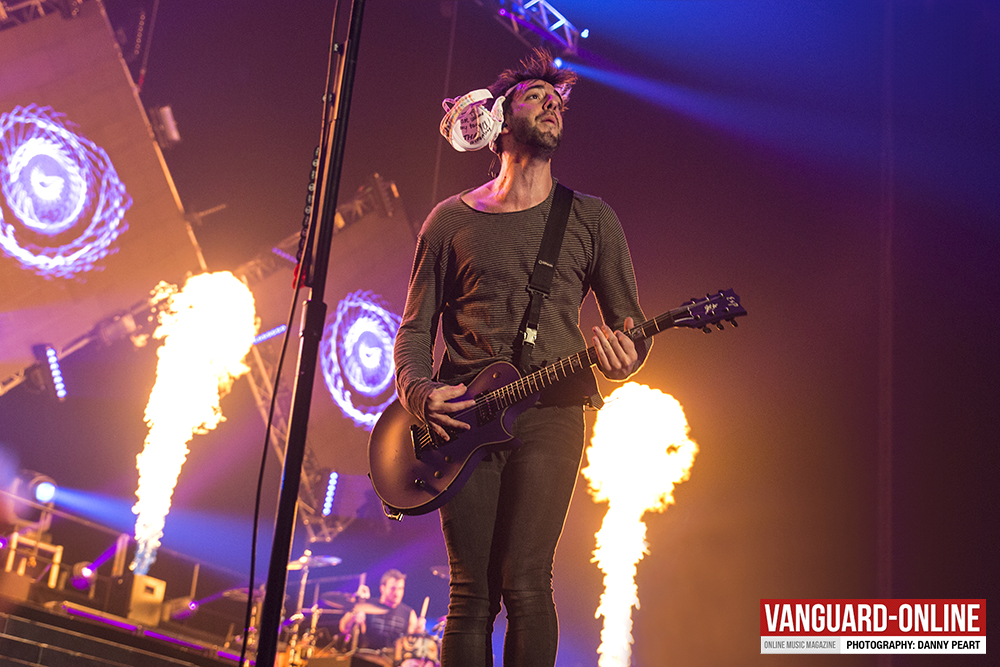 Within the first few songs, bras are flying, fireworks are exploding, fans are crying tears joy, and Jack’s already done a hundred laps of the stage out of sheer excitement and lack of self-control. Front man Alex Gaskarth has every reason to be itching to sprint down the runway straight into the crowd, to get up and personal with everyone singing back the chorus of ‘A Love Like War’ filling in perfectly well for Pierce The Veil’s Vic Fuentes guest vocals on the song.

After a short random chat about Tacos, and some pantomime boo’s for London who were apparently “to posh to jump” from Jack’s experience, Alex claims the people in Manchester don’t mess around. That’s more than backed up in ‘Lost In Stereo’ which still gets as wild a reception as it did five years ago, even without the need of any fire blasting or fireworks. ‘Popin’ Champagne’ takes us down memory lane for some old school All Time Low pop rock, before we roll the years all the way back for a fantastic performance of recent single ‘Runaways’ which has everyone back on their feet.

Joel Madden of Good Charlotte wanders onto the stage for a rather special moment for both us and All Time Low, as they play the stripped back ‘Bail Me Out’ with back and forth vocals between Alex and Joel, supported by a rather strong vocal crowd singing their hearts out. 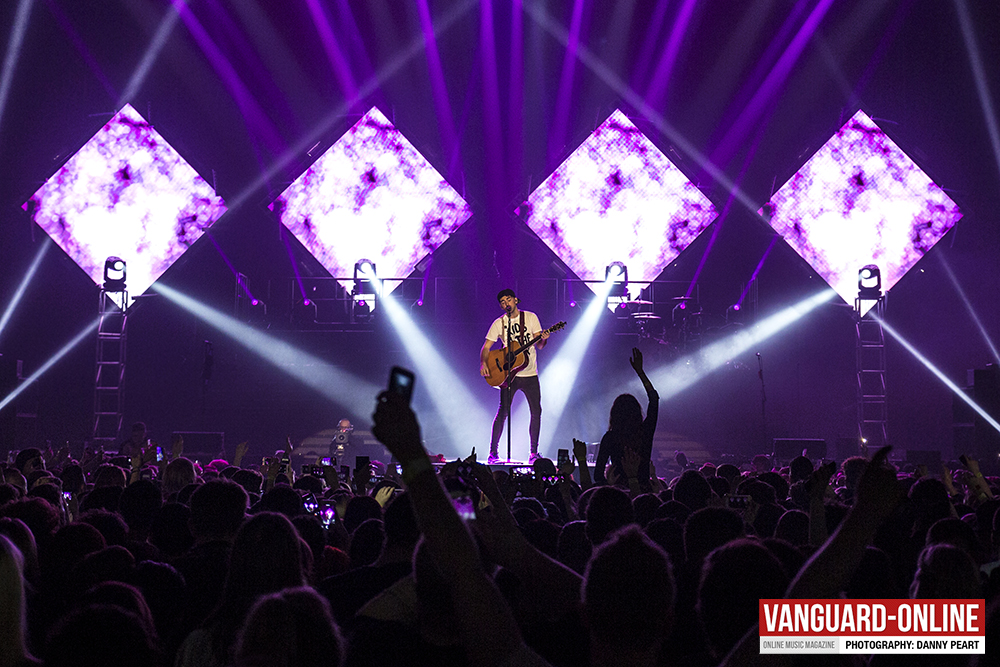 The acoustic guitar hangs around a little longer as Alex takes to the front of the runway alone deep in the crowd for a moving performance of ‘Therapy’, leaving the arena lit luminously by mobile phones and lighters.

The Baltimore boys are back to their usual selves joking and talking nonsense between songs for the remainder of the set, reminding us at every moment why we love them so much. You don’t just get a mighty rock show; you also get a comedy performance all included in the package.

It’s worth mentioning that we have seen All Time Low live well into double figures now, and they show great improvement every single time. Touring with the likes of Green Day, and playing main stage festivals has more than prepared these guys to take on a headline arena tour in the UK, and it’s proven to be a seamless one all around. From Rian’s thunderous drums to Alex’s flawless vocals, everything seems tight and purposeful between the band and it’s become second nature to play these huge shows. 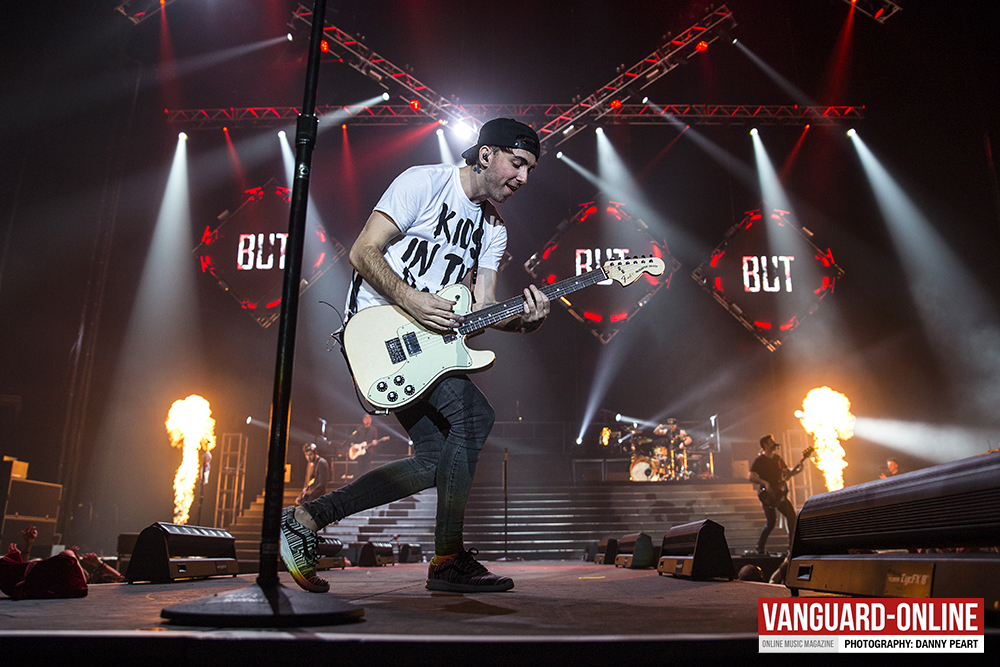 The explosive ‘Weightless’ follows a deafening encore, before the night closes with ‘Something’s Gotta Give’ and a wild and outrageous performance of ‘Dear Maria, Count Me In’ featuring all the usual guitar launching and crowd surfing antics from Alex and Jack to finish off a 10/10 show in perfect fashion.

It’s taken some time for All Time Low to reach the very top, and it certainly doesn’t look like they are to be knocked of their perch any time soon! 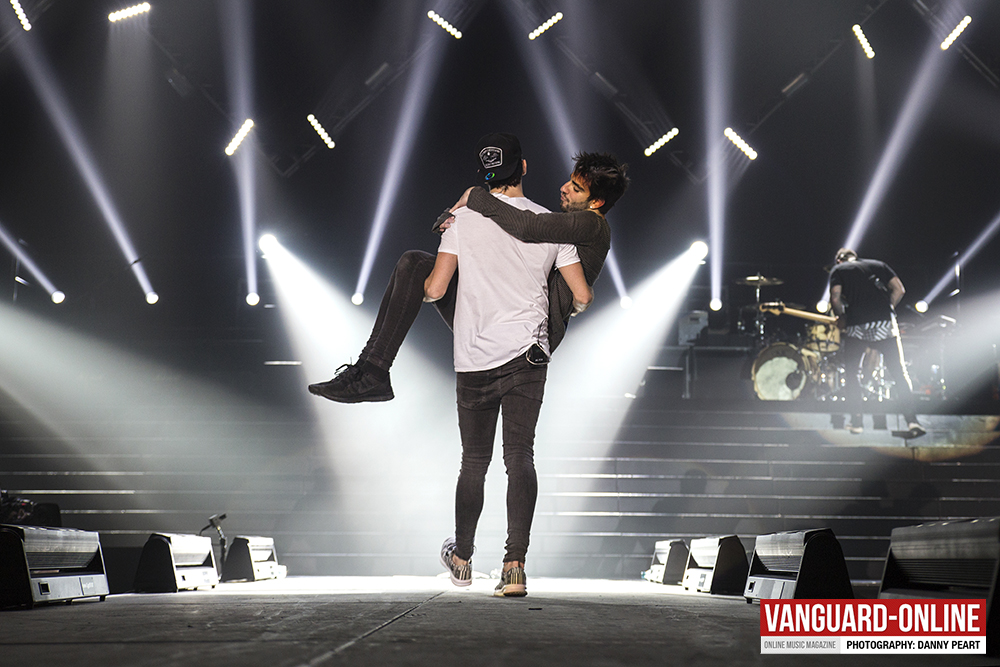