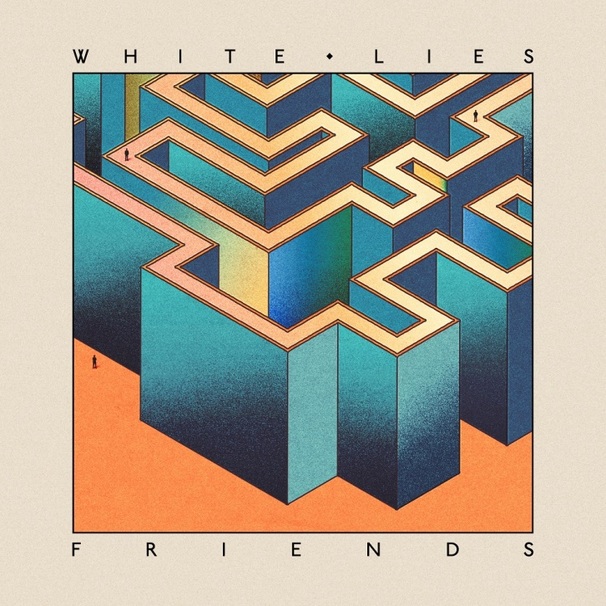 Just as fans had started to grow impatient, London trio White Lies announced their follow-up to the success of 2013’s Big TV. A concept album based around the changing dynamic between a small-town couple when the young woman moves to The Big City, Big TV examined love in the digital age in a near-absurdist fashion; the title a sly dig at the superficiality of success in a modern age, the artwork likening our heroine to a astronaut lost in space.

2016’s offering, then, is a more grounded, accessible affair. Friends – as the title suggests – deals the changing nature of relationships (romantic, platonic, or otherwise) as a recurrent theme, along with all the insecurity and nostalgia which they may elicit. Sonically it offers White Lies at perhaps their most confident, fearlessly embracing whatever each track suggests; be that 1980’s soft-rock, disco, anthemic pop, or even revisting the dark synth-rock of their debut. Self-produced and recorded in Bryan Ferry’s private London studio after splitting with their record label; Friends is White Lies all grown up.

Album opener and lead single Take it Out on Me sets the scene with its anthemic chorus and 80s-imbued guitar-driven synthpop. Not unlike Big TV’s first offering There Goes Our Love Again, White Lies embrace their pop sensibilities here, but the playful melody is juxtaposed with anguished, near-masochistic lyricism; “I’m in love with the feeling of … being used”. Written by bassist Charles Cave, they too are a work of contrasts, detailing how much pain unconditional love in the face of crippling insecurity can cause, whilst putting on a front for the benefit of your partner. Nearing the end of the track “tell me, tell me, tell me what is going wrong, help me, help me …” has become a mantra of sort, a repetitive refrain building to a layered crescendo of deceptive exuberance. The accompanying music video is surprisingly gripping and cinematic, set in Mexico and directed by award-winning David Pablos after lead vocalist Harry McVeigh saw his Mexican Academy Award winning “The Chosen Ones” (Las elegidas) on Netflix. Permeated with heavy-handed religious symbolism and abstract narrative, even featuring a cameo from Harry himself, the video is a reinterpretation of traditional stories of saints in modern day Tijuana, with some dark humor in the mix. Interestingly the track itself was – according to Charles Cave – “inspired by a lunatic on Instagram who kept commenting on a friend’s photos in pseudo Biblical verse. From his profile I discovered he lived in a remote cabin with a rough-looking dog. He posted weird videos in which he quoted random numbers. As a challenge, I turned them in to a song. The only problem was that it went so well everyone said it should be the first single, so I relented and gave the chorus real lyrics.”

Morning in LA is a more relaxed affair, opening with an infectiously catchy synth melody, but soon dampened by the existential angst of White Lies that fans have come to know and love, “some time, I have to wake up, but it’s all a little painful”. An honest depiction of adult friendships in a fast-paced modern world, there’s an endearing subtlety to this tale of isolation and disenchantment that perhaps best captures the overarching theme of Friends, as Cave explains “In the past couple of years, we’ve noticed friends’ life situations causing them to make big decisions … Friendships have begun to feel adult and our perception of time has changed”. The vibrant, shiny production unexpectedly adds to this understated love letter to friends, making it perhaps the most emotive cut on the album.

Hold Back Your Love is a favorite of White Lies (on par with hit singles Death and Bigger Than Us, according to Cave) and it’s easy to see why. This soul-searching electro-fuelled track will no doubt translate seamlessly to a live setting, where White Lies are renowned for their cathartic singalong moments. Hold Back Your Love offers plenty scope for this; all confident hooks, soaring synth, dreamy interludes and Talking Heads inspired danceability.

Don’t Want to Feel it All sounds as though it could comfortably soundtrack a 1980s coming-of-age film; summery nostalgic synth abound in the chorus and dynamic tempo changes lend it a certain romanticism, the featured guitar of the outro somewhat reminiscent of the Smiths. Comparisons can be drawn between the heavier synth of Is My Love Enough? and fellow Eighties synth fans Chvrches. Friends’ big rock moment comes in the form of Summer Didn’t Change a Thing, guitar heavy in the chorus and drawing parallels between White Lie’s more Indie Rock aligned debut To Lose My Life… Lyrically it depicts a stagnant relationship “(But I’ve got nothing to say) Summer didn’t a change a thing (and I’ve got nothing to do)” culminating in a propulsive final chorus and outro, a track long-time fans in particular may appreciate. After this Swing signals somewhat of a departure; an understated and poignant track recounting the quiet acceptance of a loss of love “I wake up lonely with love at my side” it boasts a fragmented but alluring groove. Harry’s vocals have a certain haunting quality – again reminiscent of To Lose My Life … – and despite its extended outro it captivates till the end, an affecting 5 minutes 33 seconds. Come on further depicts a fractured relationship “but there’s something wrong, come on come on, you know, we just play along” though this time with more conviction, culminating in a rush of unrelenting guitar and drums. Cave explains that “it’s a song about when any noise feels too loud, and any quiet feels too unnerving; when there’s things that need to be said that have been bothering you, but you’re not sure you’ll ever be ready to say them”, which is certainly captured in the track. Right Place offers one more interjection of synth before closing Friends on evocative soft-rock ballad Don’t Fall, a portrait of hopeless longing. Nostalgic, and oddly romantic and comforting despite its somber undertones, it proves the perfect closer to White Lie’s much anticipated fourth release.

Friends the ten-track album will be released  October 7th 2016 on CD, vinyl, picture disc, digital download and streaming formats, as well as a special box set edition which will include a cassette and four exclusive bonus tracks. Pre-orders are now open at all retailers including White Lies’ official store, iTunes and Amazon.

White Lies are also undertaking an extensive UK and European tour which stretches from late September through to the start of December. It includes a major homecoming show at London’s O2 Shepherd’s Bush Empire on November 22nd. Full dates available at www.whitelies.com.