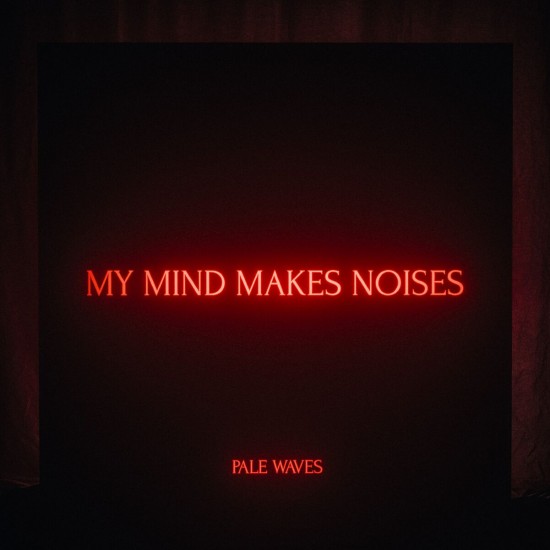 Pale Waves’ highly anticipated debut album could not have arrived at a better time. In 2018 nostalgia is more marketable than ever, and is something My Mind Makes Noises channels in abundance. The Mancunian quartet evoke the shimmering synth and gentle melancholy of 1980s British pop with impressive authority, but have a contemporary pop sensibility that spares them from feeling stale and imitative. Lead singer and lyricist Heather Baron-Gracie details the love, loss, and confusion of growing up with commendable candour, but there’s no lack of singalong choruses and anthemic guitar riffs. Like Paramore’s After Laughter, My Mind Makes Noises contrasts the fun of big, bold, 80s pop with honest depictions of struggle and self-doubt.

Album opener Eighteen is a dreamy ode to falling in love on the cusp of adulthood, an intense and all-consuming love that shapes your worldview. Glistening synth gives way to uplifting guitar-driven choruses – cut through by Heather’s commanding and emotive vocal – that wouldn’t feel out of place in an indie-coming of age film. The accompanying music video is appropriately cinematic; long stretches of winding roads and lonely forest interspersed by clandestine romantic encounters.

The (almost) title track Noises is deeply personal and introspective. It speaks plainly of Heather’s struggle with self-doubt, insecurity, and body image, and was written in the hope that it could offer some comfort or validation to any of Pale Waves many young fans who might share these struggles. Paired with driving bass, piercing synth, and a jarringly danceable guitar solo, Noises showcases Pale Waves ability to craft honest, vulnerable pop music still laden with catchy hooks. The anthemic Drive is a further example, “Is it all in my head, what they said? I’m not feeling too good I would cry if I could”, that’s sure to be a live favorite.

Loveless Girl reflects on a failed relationship with the unexpected addition of chopped vocals, while bittersweet 80s ballad When Did I Lose It All offer a well-placed change of pace mid-album. Detailing the reluctant parting of two young lovers, the lyrics are simple but endearing in their sincerity, and hazy vocal effects highlight Heather’s poignant delivery. Following track She is an even softer – and sadder – ballad, sharing the fallout of infidelity with brutal honestly: “I feel pathetic in so many ways, how can you just stop loving me in a matter of days?”. Latest single Black continues to explore this feeling of being overly invested in a relationship doomed to failure; “you don’t love us any more, but I do, but I do, you don’t think we’re worth it, but I do, I do”.

It’s not all heartbreak though. Came In Close is a youthful ode to burgeoning attraction, an infectiously catchy party anthem of pulsating synth, where drummer Ciára Doran confidently propels the energetic chorus. In danceable single Television Romance Heather pokes fun at the TV trope of it’s namesake where persistence results in reciprocity of affection; “oh baby, won’t you stop it? You and I haven’t got it, television romance”.

Nevertheless, album closer Karl (I Wonder What It’s Like to Die) is an unexpected highlight of the record. An acoustic tribute to Heather’s late grandfather, it is a raw meditation on grief and loss. A heartbreaking narrative, it plays like a diary entry; indeed much of this record does, cultivating a sense of intimacy between band and listener. As this fitting intro quietly fades to silence we see Pale Waves efforts to diversify their sound, and wonder what this might mean for future releases. For now, My Mind Makes Noises is a confident debut that embraces honest, nostalgic pop, with something to offer both fans and casual listeners alike.

My Mind Makes Noises will be released by Dirty Hit on September 14th 2018 and is available to pre-order now. Pale Waves have also announced a series of live in-store shows followed by an extensive UK and Ireland tour, details of which can be found on their website here.