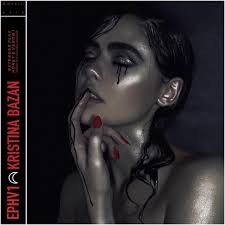 Instagram is not typically the social media platform of choice for launching a music career, but that’s exactly what Kristina Bazan has done with her debut EP, HV1 [Honey & Venom 1]. Bazan is known for her fashion blog Kayture (a portmanteau of her first initial ‘kay’ and ‘couture’) which she launched while still in her teens. Born in Minsk, Belarus in 1993, Bazan spent part of her childhood  in the US before moving to Switzerland where she launched her blog. Kayture showcased Bazan’s talent for creating editorial-worthy photos and outfits which teamed clothes from high street stores such as H&M and Zara with items from luxury brands. Kayture also imparted lifestyle advice while documenting Bazan’s travels to the fashion capitals of the world, eventually earning her over two million Instagram followers (a colossal number in the blogging world) and a reported seven-figure contract as a brand ambassador for L’Oréal. However, in a lengthy post on Kayture in May this year, Bazan stated she had grown disillusioned and unfulfilled by the superficial nature of fashion blogging, and declared her intention to commit herself to her true love: music.

HV1, released two days before Bazan’s 25th birthday, is ultimately about the effect social media and technology has on modern life, and the anxiety this causes us; as Bazan put it in her blog post, ‘It’s like humans trying to be robots’. Opening track VR [Virtual Reality] is shimmering 80s discotheque with Bazan’s vocals recalling Lana Del Rey, lamenting her generation’s need for instant gratification in the age of social media: ‘nothing around you is real/danger you know couldn’t kill/algorithmic emotions/see you in VR’.

Kayture exuded a distinctly European sophistication, and HV1 is no different. The influence of Bazan’s relocation to Paris is apparent in the EP’s moody, cultured aesthetic. Iron Veins opens with mournful, operatic vocals before Bazan ponders a future where humanity has become so enhanced by technology that people have iron veins, against a dramatic backdrop of robotic synths.

Old Soul is a dreamy, retro love song with sultry vocals while Killer is an electronic, robotic pop song about a toxic lover; Rush is a seductive foray into R&B beats. The EP’s greatest triumph, however, is arguably closing track The Devil, an unexpected doo-wop throwback which compares love to a ‘dance with the devil’. The range of Bazan’s voice is a revelation, and the conviction with which she sings makes the song irresistible.

Kristina Bazan sounds liberated now she has chosen to embrace her darker side. Her eye for detail in the world of fashion has served her well in creating her intriguing and stylish debut EP. In any case, Kristina Bazan has delivered exactly what her fans have come to expect from her: quality.