get your copy here

Dusting off their iconic Members Only jackets and firing up the old Roland synthesizers, 80’s synth-pop legends Erasure have revived their signature sound with their new album, ‘The Violet Flame’. Unfortunately however, there’s not much new coming from lead singer, Andy Bell, and keyboardist Vince Clarke apart from a seamless string of generic 80’s pop duds.

To be fair to the dynamic duo, opening track Dead of Night does flood us with priceless nostalia for high hair and shoulder pads, with its upbeat catchy rhythm that’s clad in that traditional Erasure-styled wave of uplifting synth. accompanied by Bell’s memorable vocals that haunt the track throiughout. However, what follows is simply a collection of tracks sounding extremely similar to the first. Reasons carries the same repetitive beats as Promises and Under the Wave.Smoke & Mirrors effectively distances itself from the rest, but only through some unnecessary (and also quite annoying) pan-piping. 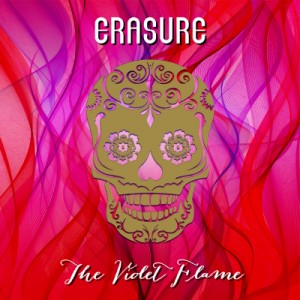 However, it was a breath of fresh air to find that, in places, Bell and Clarke did try to switch things up this time around – Elevation swaps out the overused pop sound for some soul-touching house vibes brushed lightly with simple melodies that work pleasantly together. Flagship single Sacred taps into a more current EDM sound, but it’s quickly outdone by reworks, notably a Black Light Odyssey remix – the Califonian duo  blends together a dangerous mix of electro and techno to create a dark, ominous version which makes you almost wish it was the original.

An average release from such talented producers who are capable of so much. Unmistakably classic Erasure, although one may hear similarities to Eric Prydz or Sander Van Doorn.

The 9 track remix pack for Sacred is out now here