Unless you go really early getting to the Notting Hill Carnival is going to introduce you to a world of pain. Getting on to a Central Line train post 12 o’clock is never going to be easy, and once you’re on, you’re a hostage to fortune, for you will be sardined into the train, and have no real say in who your cushion buddies will be. In some sense from the moment you get on the train the carnival atmosphere takes hold, that slightly neurotic tension between the anticipation of having a good time mingled with a tiny panic that at any minute it could all get out of hand and blow up. Some people decide to get off a few stops before Notting Hill to walk up to the event. However if you do get off at Notting Hill, you’ll find yourself moving slowly with the crowd, on the instruction of the police, up the escalators and through the labyrinthine corridors, again looking forward to the event, but also thinking that this isn’t a million miles away from what it must have felt like to be led to the concentration camps, everyone, big and small, young and old, in a shuffling fearful obeisance. Reaching the stairs to the exit of the station in Notting Hill, seeing daylight produces a great sense of hope. Being hit by the rudeness of fresh air provokes a reflex reaction, a huge intake of air, followed by an incredible sigh.

Thrust into the beginnings of the carnival can seem a bit disorientating at first, from the word go, loud urban dance music is blaring from someone’s third floor bedroom, transient circles of dancing friends, like whirlpools, take shape amongst the rivers of people working their way up to the carnival proper, before they dissipate and are taken on by the general flow of things. But that music, its like nothing you’ve ever heard, just makes you want to dance, just an incredible sound, but you move on.

Ever since I started attending carnival twelve years ago I couldn’t help notice a strange juxtaposition of cultures and peoples. Out on the streets you’ve got a whole mix of people, most of whom seem at some level to be quite taken by one or more of a combination of drink, drugs, dancing and music. However looking from their bedroom windows from the big Notting Hill townhouses one can sometimes see folk of Caribbean heritage, whose fortunes have most likely been made with the gentrification of Notting Hill which kicked in the early 1990s, and has been continuing ever since. I’m not sure that they particularly enjoy the carnival; they seem to prefer staying at home, and guarding their castle. But also, and perhaps this has become ever more marked, some houses are full of extraordinarily rich looking kids, many though by no means all white, dressed like models. The women tend to dress like models from Marks and Spencer, and some of the men look like they’ve been helicoptered in, fresh from a regatta.

It’s hard to understand what’s going on. I just know that when stumbling across Max Romeo doing a live performance of Chase the Devil to several thousand people, standing above, on one of the windowsill ledges of the town houses above his stage, there’s a guy wearing beige towel trousers with a low crotch, a pink as you like boaters jumper slung over his shoulders, and a pristine white t-shirt with a Guinness advert print. To top it all off he’s wearing a black bum bag. He’s getting down to the sound of Max Romeo, bending at the waste knees and arms a flailing like the dog in the Kia-Ora advert of many moons ago. There’s a subtext to this, in some ways he represents what the common man, everyone below, is supposed to despise. I cannot possibly know why he is doing what he is doing, I do not despise, and I cannot really judge, but I almost feel like his dress, prominence and dancing are all deliberately overdone to provoke. There is no way he could, and no way he would go down into the audience and dance like that. Its like there’s a whole class of people, who think fuck it, we’re not going to join in with you guys, but you’re here, and this is our house, so we’re going to treat the whole thing as a bit of entertainment, and accentuate the divide, add another tradition to the carnival, here, from twenty foot up.

It does leave you scratching your head, what is the future for carnival? Dissolution? Or maybe by 2025 it will become a series of open-air classical music concerts. Whilst I’m thinking about this I pop into Carluccio’s and get a calzone. 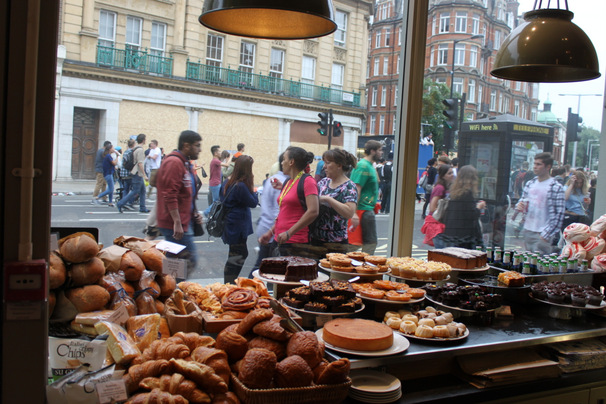 There’s always a bit of aggravation at the carnival, it comes with the territory, the plethora of gangs, shirtless men with extraordinary musculature, thin guys who stare impassively out of baggy hoods, hot heads who lose their shit in the middle of a crowd because somebody touched them. There’s usually a load of guys in their twenties, dressed in sports clothes and hoodies, who scowl at just about everyone who walks past, from behind metal railings, in front of social housing. They look like they’ve come out to protect their patch.

Of course the biggest gang is the police. And that’s the fascinating thing about carnival. The police are definitely there. And frankly the carnival couldn’t function without them. But again there’s a subtext, the carnival is principally about people of Caribbean heritage, the police have an institutionalised culture of racism, stop and search.

The most amazing phenomenon has unfolded. Seven men, none of whom know each other, have distributed themselves at equal distances over a distance of ten meters, each one taking a piss against a fence. They’re extraordinary display of spatial distribution has been helped by a row of Boris Bike posts, which are usually used to hold bikes in place, but which are now demarcating an imaginary urinal. Each man uses two posts to demarcate his particular spot. As more men walk past they immediately get what is going on, and they start to queue up waiting to take a piss. All until the police turn up. Each copper makes it his business to peer over the shoulder of the infringer of public decency, makes some kind of physical contact with the aggressor, and requires them to stop. Suck it back up. In one case a copper needlessly and deliberately knees his victim in the back of the knee, perhaps hoping that it’ll cause him to piss on himself. You get the sense that there’s a fair percentage of policemen who hate everything that the carnival represents, and the rest, the decent ones, just look on with a sense of concern, like a parent on Sun, Sea and Suspicious Parents.

But I mean mostly people just leave each other to be, which is the beautiful thing about the carnival, pretty much no-one gives a fuck. That’s why its great for the loners, the people who no-one will remember (I’ll remember you), who stand around in the crowds, comforted by company, but nevertheless not knowing which way to turn, not having anyone whose gaze they can take respite in.

And one of the most beautiful parts of the carnival is the suspension with normality. A row of revellers sits on top of the bus stop, a bunch of rich kids dance precariously on a balcony with bottles of Prosecco in their hand dancing to Max Romeo. Housing association tenants spend the whole day as toilet attendants, leasing out their bog for a quid a go. Huge powerful whiffs of cannabis or derivate thereof puffs through the air. Four beautiful and petite Chinese tourists are posing like models and taking photographs of each other.

It’s quite clear that this whole event is fuelled by the consumption of drugs and alcohol. The event becomes more and more buoyant until 6 o’clock where it jumps off a cliff. At this point everyone is starting to come down from whatever they took, even if they are carrying on drinking. At 6 o’clock if you look around you will not see a single happy face, everyone looks terrible, and to compound the misery, each person looks as if they think they’re the only one who feels like that. They all know that the carnival proper is coming to an end, and for the most part, for most people, the night is too, even if the culture of the carnival after party is often talked about. At 7 o’clock the Gladdywax soundsystem went dead, seemingly no warning, stone dead; as if somehow the police had developed the technology to allow them to pull the plug on the whole carnival with the flick of a switch. The sudden silence was eerie. We walked off, it was over.

But it’s not over, and one of the most magical, mystical and frankly terrifying things about carnival, is the next twenty minutes, when all of a sudden the skies and streets turn black, and as you make your way you feel like you’re walking through the scenes of a smoking battlefield. This is partly because all the barbecues at this point are being put out. The streets are strewn with litter. But you’ll invariably walk past half a dozen revellers, now prostrate on the piss and beer sodden pavements, some conscious, others not. A woman is on the floor; her head, which is on the floor, has blood leaking out of it. She’s surrounded by policemen, one of whom is taking notes, beseeching her friend to stay with her, who finding it difficult to balance against the wall, is telling her she wants to go home. A woman who is stood by a sound system gets a kiss of a man, it’s a bit of a snog, but he appears a stranger to her, he hops off into the night, and then she unties her two dogs from the railings behind her and makes her way. As you’re walking away from the carnival you see gangs walking really fast towards the epicentre. You pray you’re not going to be victimised and shanked, and become one of those one or two in a million, who every year find that the carnival was their last experience of God’s dear earth.