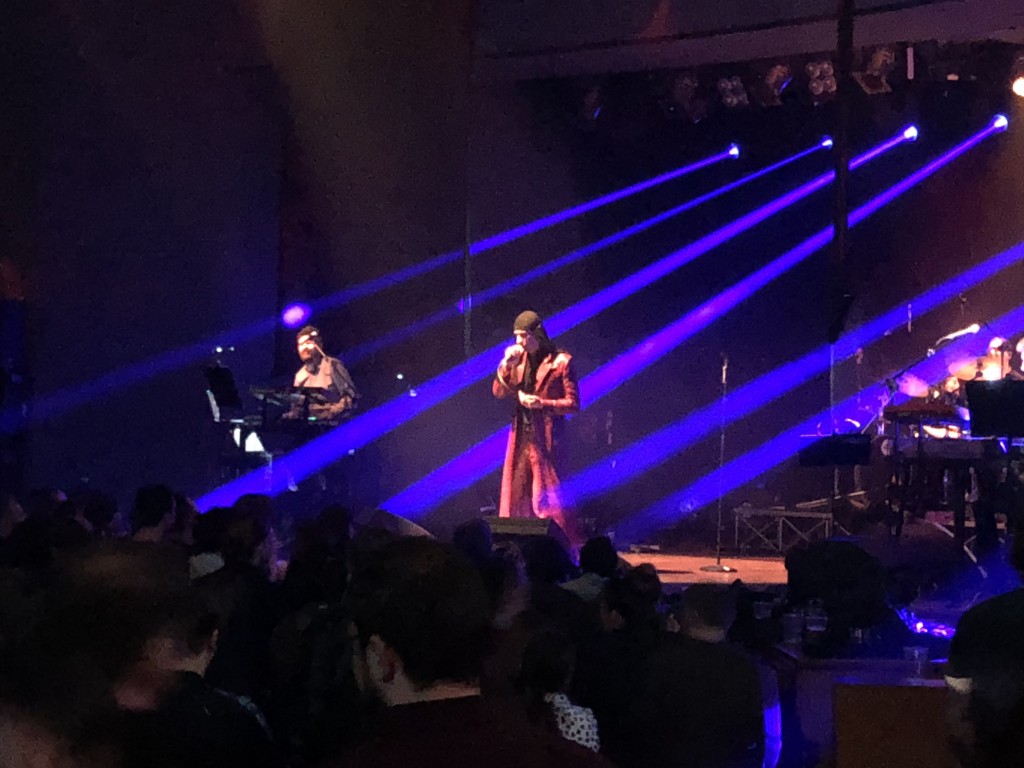 The venue for tonight’s concert is ten minutes from the spot where Arch Duke Franz Ferdinand was shot—apparently by a Serb assassin—which precipitated the First World War. This association with war is quite fitting because for the the most part, and especially during the early bit, the beat that provides the backbone of Laibach’s show sounds like a slowly marching army with unstoppable momentum. Sarajevo has regularly been subject to imposition of invading regimes, whether the Ottomans, Austrian-Hungarians or Nazi Germany. More recently the city was subject to a three year siege, implemented by Serb forces in the early 1990s. The Serbs, led by General Mladic, sniped civilians and resistance fighters, shelling residential flats and Bosnian army facilities. Whilst the metaphor of an advancing army is not quite appropriate here for the Serb army was for the most part stopped in its tracks at the mountains and hills that surround the city, the siege itself is highly relevant to the gig. Laibach visited Sarajevo and put on a concert during the last year of the siege.

Laibach’s lead singer Milan Fras is queer, and cuts a tall muscular militaristic figure. He takes the gold medal for having the most extraordinary and ridiculous depth to his voice, putting Chuck Mosley into silver. Fras is dressed like a Nazi with a penchant for the latest fashion, tightly wrapped in a blood red leather body suit. This is all topped off with a black keffiyeh which  makes him look like the arch-villain of an Indiana Jones movie. He takes the microphone and speaks meaningfully and slowly into the microphone. He uses his arms and hands to convey a sense of authority. He never looses control, never gets angry, never gets sad. He’s constantly telling people quietly and calmly about what he thinks they need to know. At other points during the concert, between songs, he sinks into darkness of the backstage, and a pre-recorded message of his voice orders the crowd to chant certain things. I am reminded of the audio recording of the cool and calm instructions given by General Mladic to his soldier to bomb the hospital building in Sarajevo at small intervals indefinitely. I’m also reminded of Vladimir Putin during his annual mass media and public press conferences.

As indicated, Sarajevans know Laibach. Laibach are Balkan cousins, they are from Slovenia. In fact the name Laibach is the name the Germans gave to Ljubljana in Slovenia, this being pertinent to Sarajevans, because Ljubljana, like Sarajevo, was subject to some degree of Nazi rule during the Second World War. The venue, Dom Mladih, a spacious Communist building by the river in the city centre, is well attended, if not full. Lit cigarettes quickly fill the venue with a cloud of smoke, stinging the eyes of a poor unaccustomed Englishman and reminding him of how twentieth century night life in the UK dispatched millions of people smelling like ashtrays. Balkans like to chat during their gigs and tonight is no different. Chatting is more irresistible because Laibach’s music, whilst deafening and providing a massage for your internal organs, is less song and more dark, haunting and menacing soundscape, providing a background to people’s feelings but not a focus for their concentration. Nevertheless, there are a few take home moments. ‘Europe is falling apart’ is sung with the kind of doom that you could imagine making it on to the playlist of Putin’s Spotify playlist. ‘We Rise We Fall’ is a chirpy, whistled out song, its a little bit like Paul McCartney’s ‘Pipes of Peace’. Towards the end the band do a version of Opus’ ‘Live is Life’, cutting out the stadium pop sentimentality and turning it into something more deadly. There isn’t really any dancing, although towards the end of the concert the beat picks up a bit, provoking the free radicals at the front to start swaying.

Whilst Milan Fras captures the audience’s attention he has minor competition from the mildly interesting and sometimes disturbing visual graphics which are beamed up on to a screen which bends round the circular venue. A bird of prey is eating a sparrow, body limbs are mixing with each other, young children appear to be re-enacting a scene from the Hitler Youth and at the end we see four spinning axes arranged into the shape of a Swastika. What does it all mean? I don’t know. The rest of the band, shrouded in darkness for the most part, show studious application. At the end of the set Fras motions for each one of them to take a bow, one at a time. Fras is like an orchestra conductor, and the rest of his band are like the foot servants of a totalitarian regime.

As an addendum I have since found out (4th June, 2018) that the History Museum of Bosnia and Herzegovina held an exhibition commemorating Laibach’s visit to Sarajevo in 1995, at the time of the concert. You can find out more about that exhibition and see photos from it here.