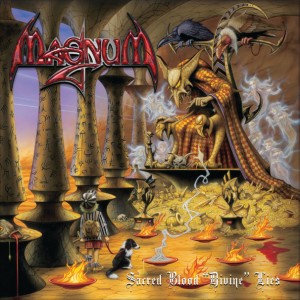 I read somewhere on social media, a fan bemoaning the injustice that they had to wait for Magnum’s new album when reviewers already had a copy. I can share their frustration as my pre-order of Sacred Blood was paid for months ago but I also have the good fortune to enjoy the benefit of an early listen. I also have a confession to make in that I delayed this review until I could listen to the album on vinyl rather than mp3 because I felt the electronic medium wasn’t doing the band justice.

It’s this fan dedication (off which I proudly count myself among) that has allowed Magnum not only to continue but also to get better at what they do. Over the past 40 years and nearly 20 studio albums they have developed a sound that is an audio representation of the Rodney Matthews artwork that regularly adorns each album cover. But since their reformation in 2001, their albums have developed a darker, heavier edge than previous recordings and Sacred Blood “Divine Lies” is the next significant step in this evolution. 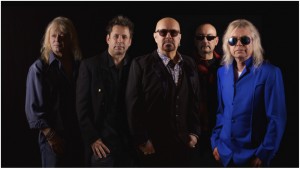 Bob Catley’s voice shows no sign of loosing any power and is in perfect harmony with the guitar of Tony Clarkin’s and glued together by Mark Stanway’s keyboards, which is Magnum’s secret weapon.

The grandiose opening title track gives a clear indication of what is in store, an album that ebbs and flows with melodic clichés, rock opera vocals and fist pumping rhythm section and the world is a better place for it.

In recent interviews, Tony Clarkin admitted that he started work on the tracks for this new album straight after their previous release “’Escape From The Shadow Garden’ and its clear to see the same mind set behind both albums.

There is depth and breadth in each track with stand out lyrics on Gipsy Queen although my first question if I ever met the band would be to clarify the meaning behind ‘Crazy Old Mothers’, I see different references every time I listen or read the gatefold sleeve notes which makes me a vintage as the sound.

‘Your Dreams won’t die’ is the clearest example of Magnum’s harder edge both in sound and subject matter but for me there is no real stand out track rather a case of the sum exceeds to total of the individual parts.

So yes, there is injustice in the world where ardent fans have to wait whilst the promotional machines has its turn but there are the little things that we must cling to and Magnum is a rare constant in a turbulent music scene. So enjoy Sacred Blood in all its glory and start to look forward to the next instalment of this rich rock heritage. 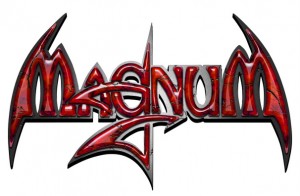